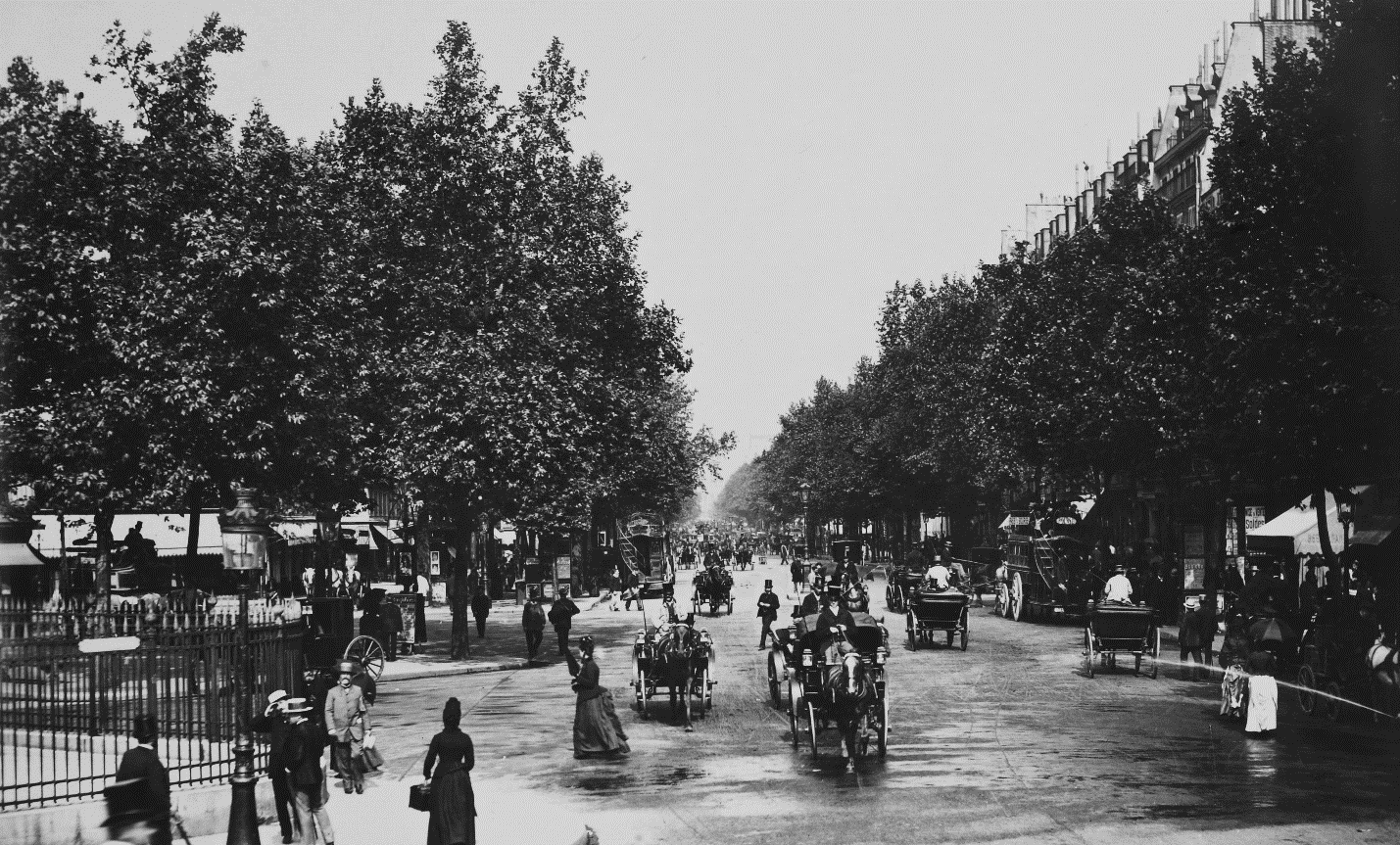 A street scene in Paris, Boulevard Madeleine (“The Hub”, September 1896)

If you asked which country had made the greatest contribution to the international auto industry at the turn of the 19th and 20th centuries,  you might be surprised to find out that it was neither the USA, Japan, Germany nor England, but France! France was the country where the automotive industry was born and it became the pacesetter for every other country in the late 19th and early 20th century.

How does one explain this fact? Here are some of the reasons.

The German engineers Nikolaus Otto, Gottlieb Diamler and Karl Benz made huge contributions to the automobile industry. Nikolaus Otto first mastered the industrial production of the internal combustion engine which ran on petroleum gas. After that, the term “Otto-cycle” (4-times cycle) became the standard. However, and ironically, Otto was not interested in building engines for transportation.

Gottlieb Daimler designed his internal combustion engine, which he fitted to a two-wheeler in 1885. The first internal combustion motorcycle was named the Petroleum Reitwagen (Riding Car) and, in the next year, he fitted it to a coach. However, Daimler was not interested solely in the automobile. His vision was to provide a means of transportation for everyone and everything, on land, sea and air.

At the same time, failing at first to resolve the steering problem presented by a four-wheeler, Carl Benz built his first tricycle. However, the German public was not particularly interested in his invention.  Daimler and Benz were also creating their inventions in a similar atmosphere of hostility and mistrust. In 1885, the newspaper, “Cannstatter Zeitung”, made bitter complaints against the horseless carriage that Gottlieb Daimler was testing on the streets of Cannstatt: “…a repugnant, diabolical device dangerous to the life and well-being of the citizens”. Even the local Police became involved and Daimler was forced to move his tests
to a motorboat on the river. To avoid any problems from the hostile public, he disguised the boat with wires and insulators claiming that it was electrically powered.

In 19th century England, the major obstacle to the automobile industry was The Locomotive Act of 1865. The act, known also as the Red Flag Act, imposed the most draconic restrictions and speed limits which required all road locomotives, which included automobiles, to travel at a maximum of 4 mph (6.4 km/h) in the country and 2 mph (3.2 km/h) in the city, as well as requiring a man carrying a red flag to walk in front of road vehicles hauling multiple wagons. English engineer Edward Butler built his three-wheeled petroleum gas powered vehicle in 1888. It was a very progressive construction and included the Ackerman steering system, electric ignition and spray carburetor. Butler improved his tricycle over the years, but was prevented from adequately testing it due to the “Red Flag Act”. He wrote in the magazine “The English Mechanic” in 1890: "The authorities do not countenance its use on the roads, and I have abandoned in consequence any further development of it." Finally, Butler had to give up and broke up his machine for scrap in 1896.

Carl Benz was the object of a violent attack by the newspaper, “Mannheimer Zeitung”: “A useless, ridiculous and indecent invention. Who is interested in such a contrivance so long as there are horses for sale?”

Now let us look at France of the second half of 19th century and why France took the leadership of the automobile industry?

The number one reason was that the roads were good.

In his 1867 book “The Innocents Abroad”, the great American author, Mark Twain wrote, “We have come five hundred miles by rail through the heart of France. What a bewitching land it is! Surely the straight, smooth, pure white turnpikes are jack-planed and sandpapered every day. How else are these marvels of symmetry, cleanliness, and order attained? It is wonderful….”

Being in Paris, Mark Twain noticed that “Louis Napoleon is annihilating the crooked streets, and building in their stead noble boulevards as straight as an arrow – avenues which a cannon ball could traverse from end to end without meeting an obstruction…Napoleon paves the streets of his great cities with a smooth, compact composition of asphalt and sand….”

Street paving using a mixture of asphalt and sand, which was then compacted was quite an interesting detail. For a horse carriage there is no particular difference when the pavement is paved, but for a motor car this is of fundamental importance. And the fact that the streets were straight and wide is also very important. On the old crooked streets, you couldn’t really drive a motor car.

James Laux in “in First Gear” wrote, “France owed its good roads to the fine leadership supplied by the government’s corps of civil engineers out by the Ecole des Ponts et Chaussees since the eighteenth century, and to the highway, built in 1836, which required local governments to maintain local roads and authorized local taxes to finance this.”

The magazine “Horseless Age” in 1901 said, “One must bear in mind that most automobiles in France make outings in the country and are not confined to towns. The fine roads of France make automobile touring a pleasure, while in America this pleasure can only be indulged in the cities and parks, as the average American out-of-town road will not permit any long excursions”.

“Automotor Journal” remarked in 1903 that, “everybody knows that the best French roads are the best roads in the world so far as surface is concerned”.

At the same time in the United States, the roads both outside most towns and in the city were in bad shape.

Reason number three was the invention of the bicycle. Frenchman Pier Michaud introduced several mechanical devices later adopted on early cars: the ball bearing, chain drive, driveshaft, various gearing systems and freewheeling cable brake control, wire wheels and pneumatic tires. The bicycle gave people the freedom to travel. For thousands of people, riding bicycles established a taste for speedy mechanical road vehicles, completely subject to the will of the driver. The excitement of the bicycle, strongly encouraged by the excellent French road network, established a favorable situation for automobile development.

Lastly, there was a huge demand by the French public for everything new, advanced, even at times, extravagant. France became an important trendsetter.

The romantic spirit was very strong among the French of the 19th century. There was a thirst for knowledge, travel and new discoveries. Moreover, there were French writers like Jules Verne and Louis Boussenard. Their books awakened a desire for fantasy and the quest for adventure.

It is no coincidence that exhibitions of technological achievements of the present began in France, including the national ones beginning in 1844, and then the World ones. At the Paris World Exhibition in 1889, Eiffel built his tower. Can you imagine if London or Berlin had allowed the building of such a steel monster at that time? However, the French decided to build it and it still stands.

Another was Pierre Giffard who organized the first Paris-Rouen car competition in 1894.

To sum up, we can clearly see that because all the right conditions were in place, France was uniquely positioned to be at the forefront of the development of the automobile industry.