Bollée's family were well known bellfounders and his father, Amédée Bollée, was the major pioneer in the automobile industry who produced several steam cars. Both Léon Bollée and his older brother Amédée-Ernest-Marie became automobile inventors.

"Léon Bollée made some significant inventions while still in his teens, including a mechanical arithmetic calculator. In 1895, when he was 25, he constructed a motor-tricycle. This was exhibited in England in October and he sold the English rights to Harry Lawson for 500,000 francs. The French manufacturing rights went to the Société des Voiturettes Automobiles, managed by Gustave Chauveau (Ecole Centrale des A & M) in a contract that allowed Léon to make only prototypes and racing cars for the next few years. Chauveau's company actually had the tricycles manufactured by Diligeon et Cie, in shops near Le Havre owned by a shipbuilding firm, Les Forges et Chantiers de la Mediterranée. Diligeon et Cie had been manufacturing sewing machines and tools. Several hundred Bollée tricycles were made in addition to the 200 bought by Michelin Brothers, but they did not win as great a commercial success as the De Dion-Bouton tricycle. The incandescent tube ignition lacked the reliability of Bouton's electric spark, and while the 3-hp motor made them more powerful, it also rendered them more dangerous. The price, about 2,750 francs, was nearly double the De Dion-Bouton.

Young Léon Bollée remained busy in Le Mans. In 1898 he exhibited a four-wheeled car and sold the manufacturing rights to Alexandre Darracq for 250,000 francs and a royalty. In 1901 he made some voiturettes of his own at Le Mans on a new design. These were too small, however, for by now the public wanted bigger cars and this venture failed. Léon Bollée bounced back, and soon both he and his older brother Amédée resumed automobile manufacturing in Le Mans." 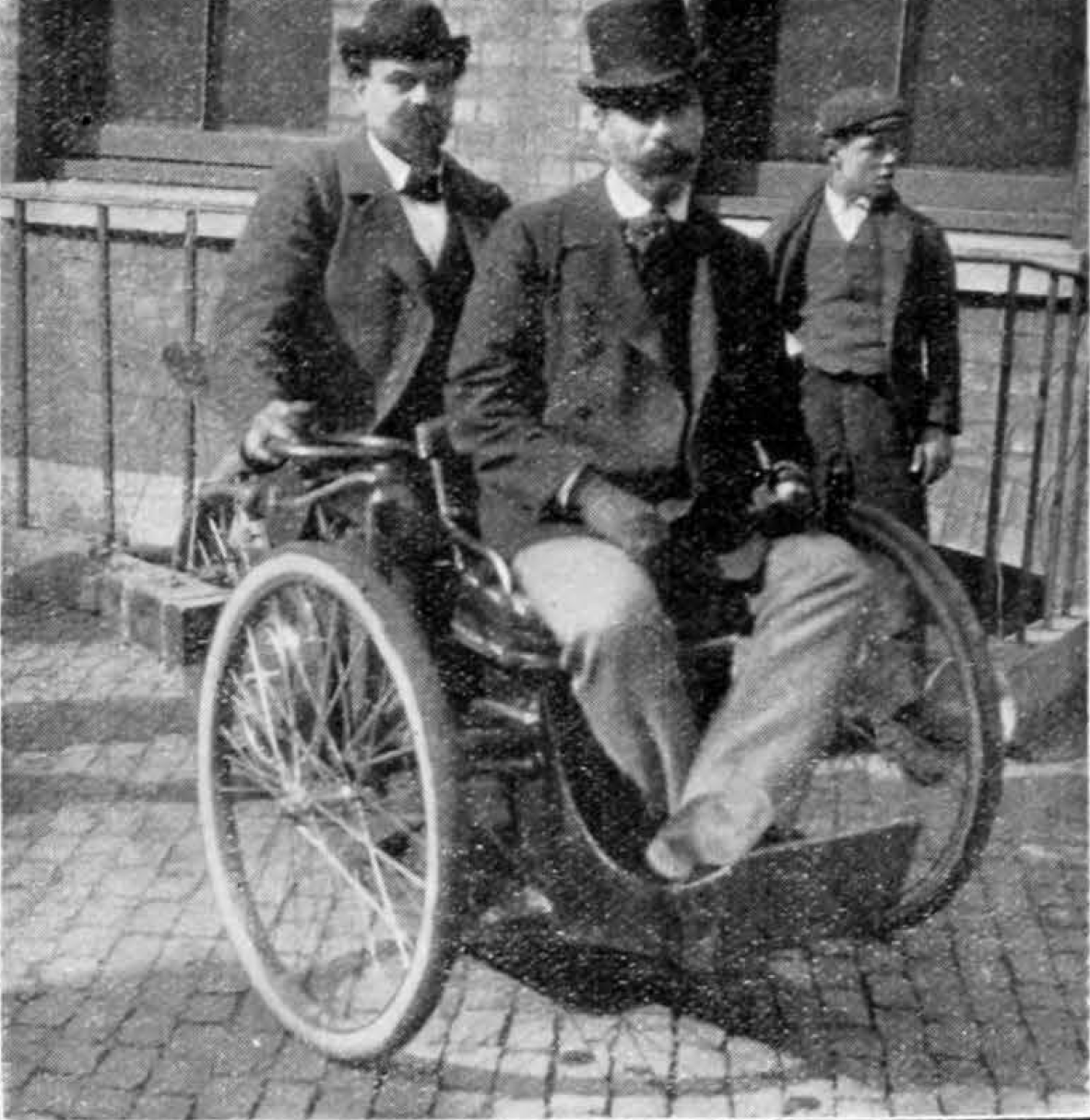 "Léon Bollée, of Le Mans, is the latest French inventor to make a sensation in the autocar world, and most certainly he has done that. In our last issue we recorded the fact of his new machine having attracted immense attention in Paris, and we now learn that within three days he took orders there for between two and three hundred machines. On Friday last, under the guidance of Mr. H. O. Duncan, he turned up at the banquet of the Motor Car Club, and gave a practical demonstration of his machine in the grounds of the Institute. Here he created quite a sensation, for it is quite within the bounds of truth to say that he actually and metaphorically made rings round every other demonstrator. This was, it is true, partly due to the fact that M.

Bollée, having ridden the machine-the first and only one, by the way, which he has yet made some five thousand miles, is perfectly at home with its management, knows exactly what he can do with it, and further than this has just a little bit of dare-evil in his nature which led him to do things which more cautious individuals would not have attempted. On Saturday we understand that the patent rights for England were secured by the British Motor Syndicate, and the same evening M. Bollée and his machine travelled down to Coventry. Here on Sunday afternoon he created immense excitement amongst the inhabitants by dashing wildly through the crowded streets in every direction, and it was amusing to see about eight policemen busily engaged in keeping the track clear for his operations. Nor did he confine himself to the city, as he took a run over the beautiful Warwick Road to the quiet little town of Kenilworth. On the following day he again exhibited the machine, taking one the other Coventry's most interested citizens, ourselves amongst the number, for trial spins through the streets, and the proceedings presented rather a humorous aspect when the venerable Mayor of Coventry himself became busily engaged, with the assistance of six policemen, in breaking the law, in other words, in riding through the Locomotive Acts, upon M. Bollée's petroleum tricycle. We give three illustrations of the machine here, which is a tandem tricycle with two comfortable railed seats, one behind the other. It is driven by a single central wheel at the back, the two front wheels being used for steering purposes. Steering is effected by means of a rack and pinion actuated by a wheel and handle, whilst the speed controlling mechanism and brake are both in connection with a long and powerful lever on the left-hand side. A very slight movement of the lever serves to readjust and alter the speed, whilst a full movement throws the engine out of gear, and applies simultaneously a powerful brake. The management, both steering and otherwise, is effected by the rider at the rear, and the machine being low, with a long wheel-base, is very safe at high speed. It is capable of considerably over twenty miles an hour on the level, and of mounting hills of good gradient at an eight to twelve miles pace. When once going, the vibration is not felt, though when stationary, as with all other petroleum motor carriages, this is considerable. It makes somewhat of a noise, and, perhaps owing to the quality of the petroleum used, is rather smelly, " but is, undoubtedly, one of the handiest, fastest, and most practical light autocars we have yet seen. We append three illustrations of the machine, one a wood engraving showing the mechanism, the other two reproductions from photographs by one of our staff taken in the Queen's Hotel, Coventry, showing in one case M. Bollée alone upon the tricycle, and in the other the inventor with his French friend as a passenger." 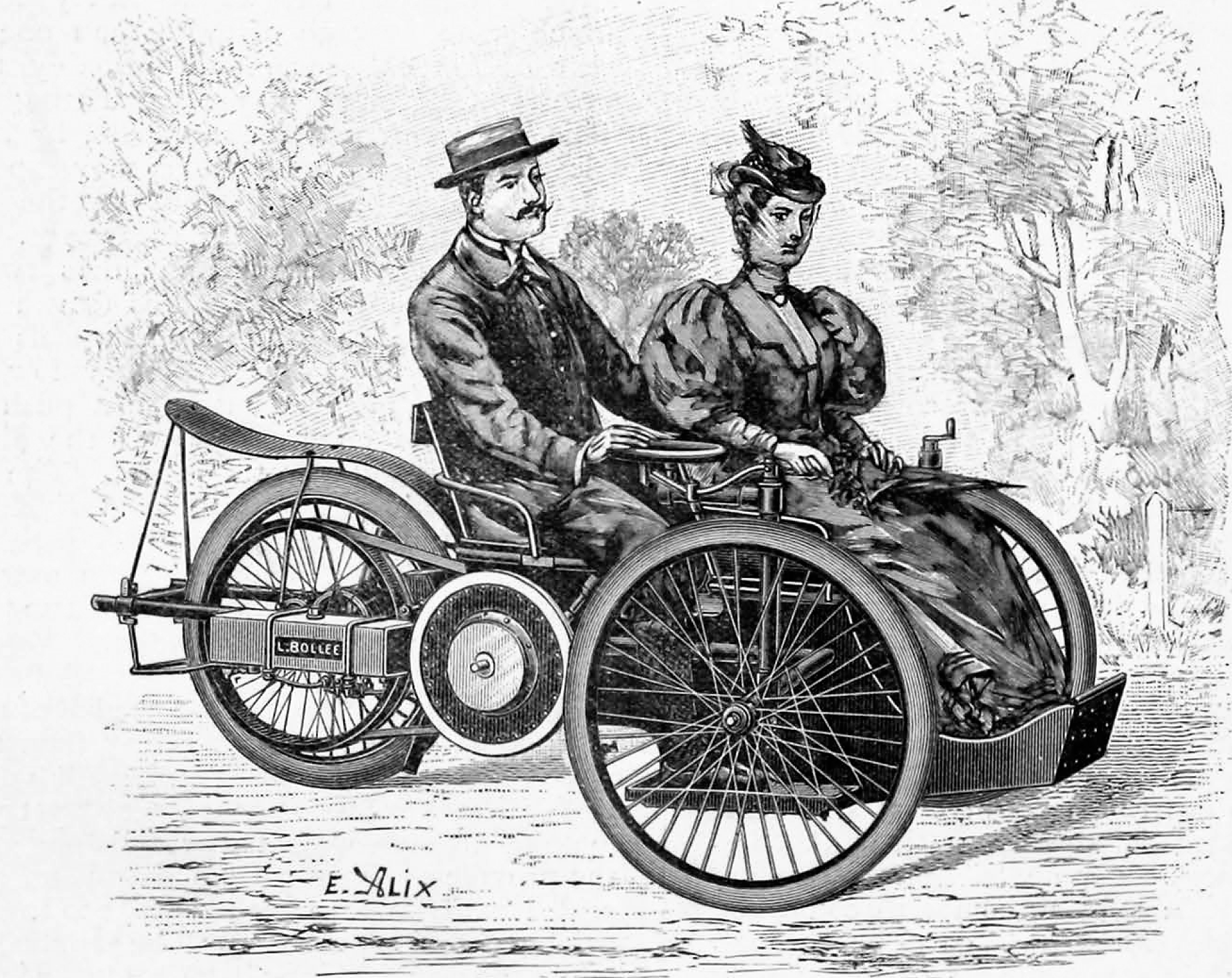 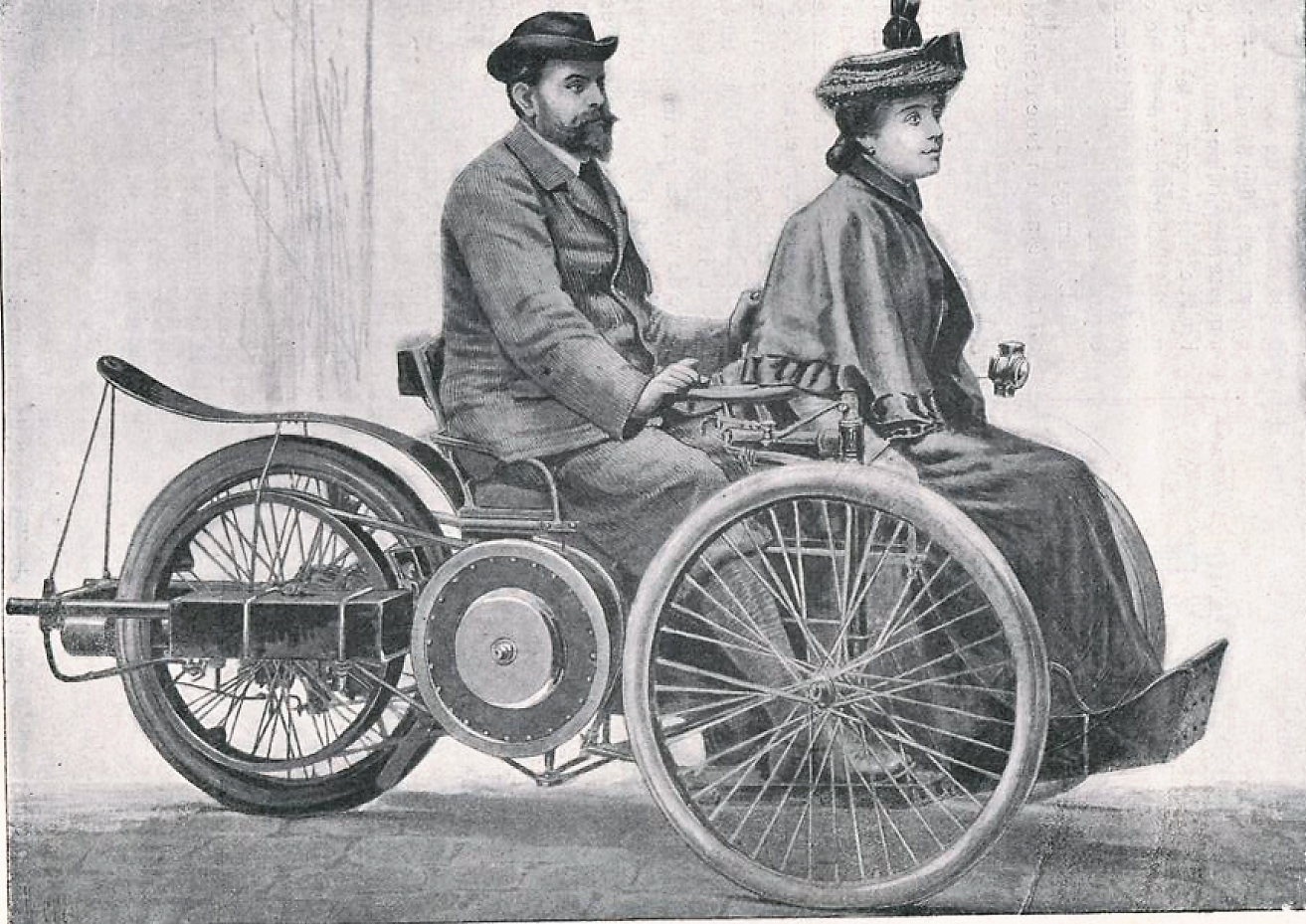 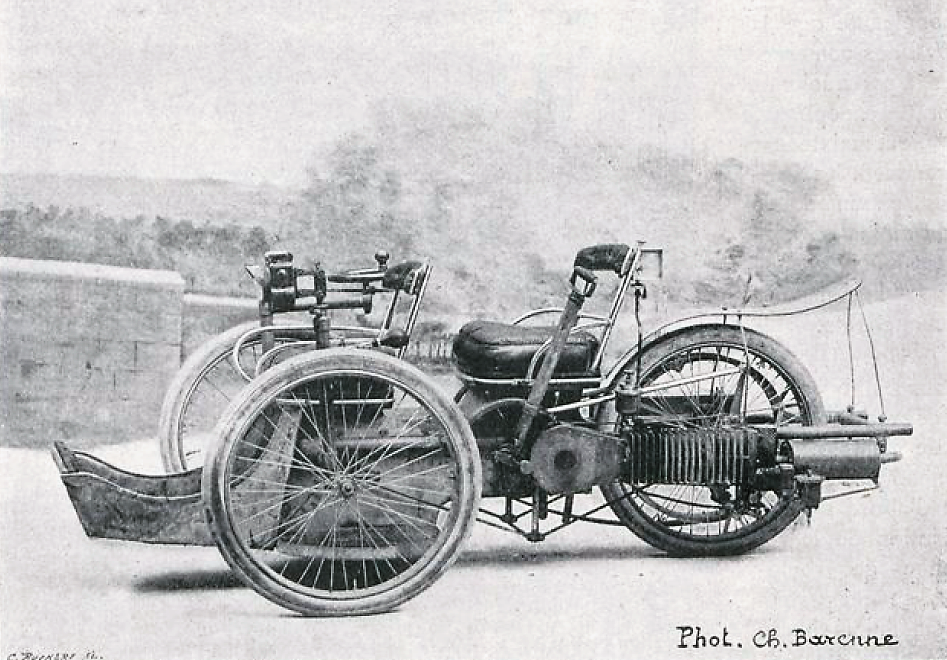 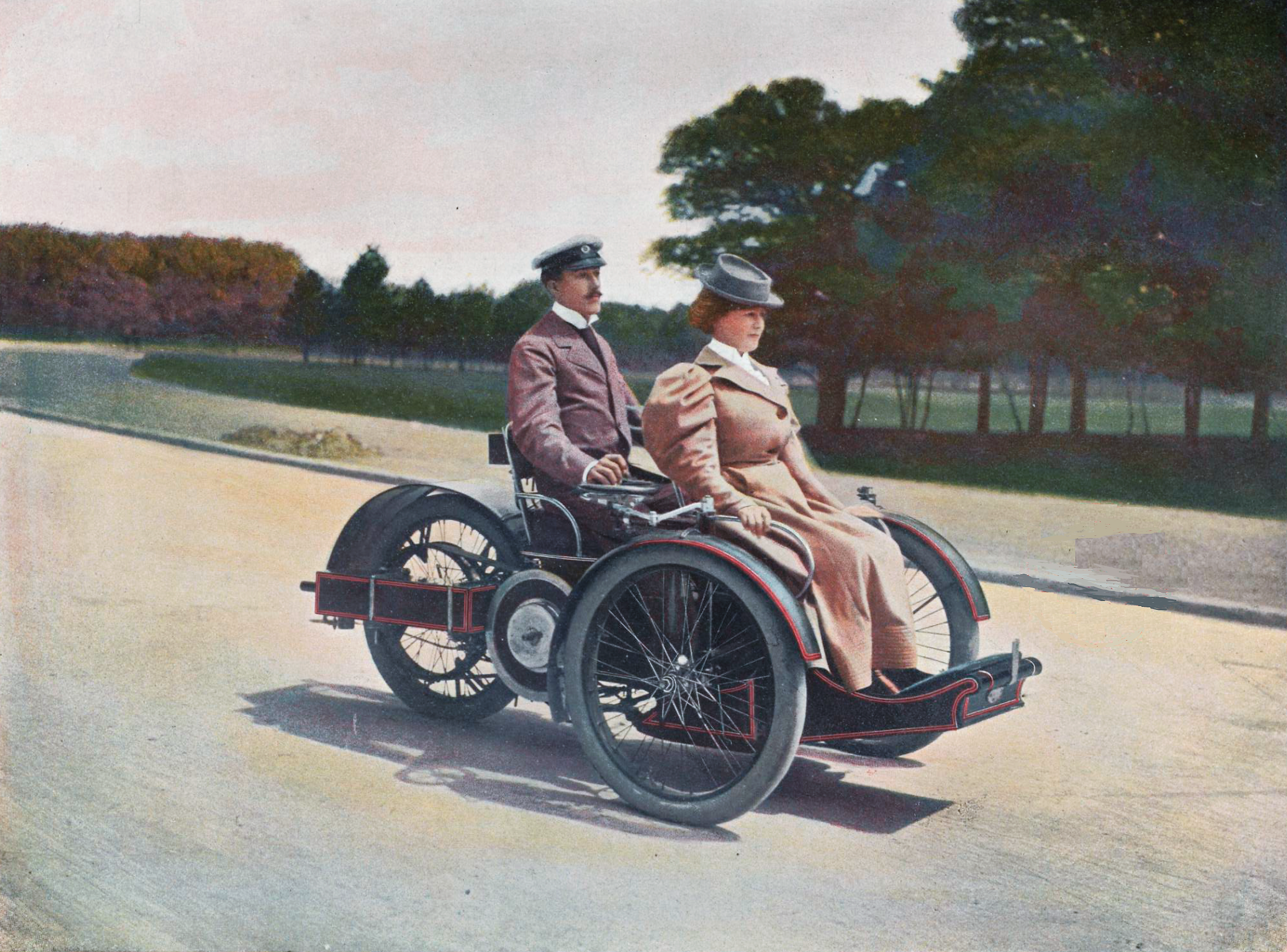 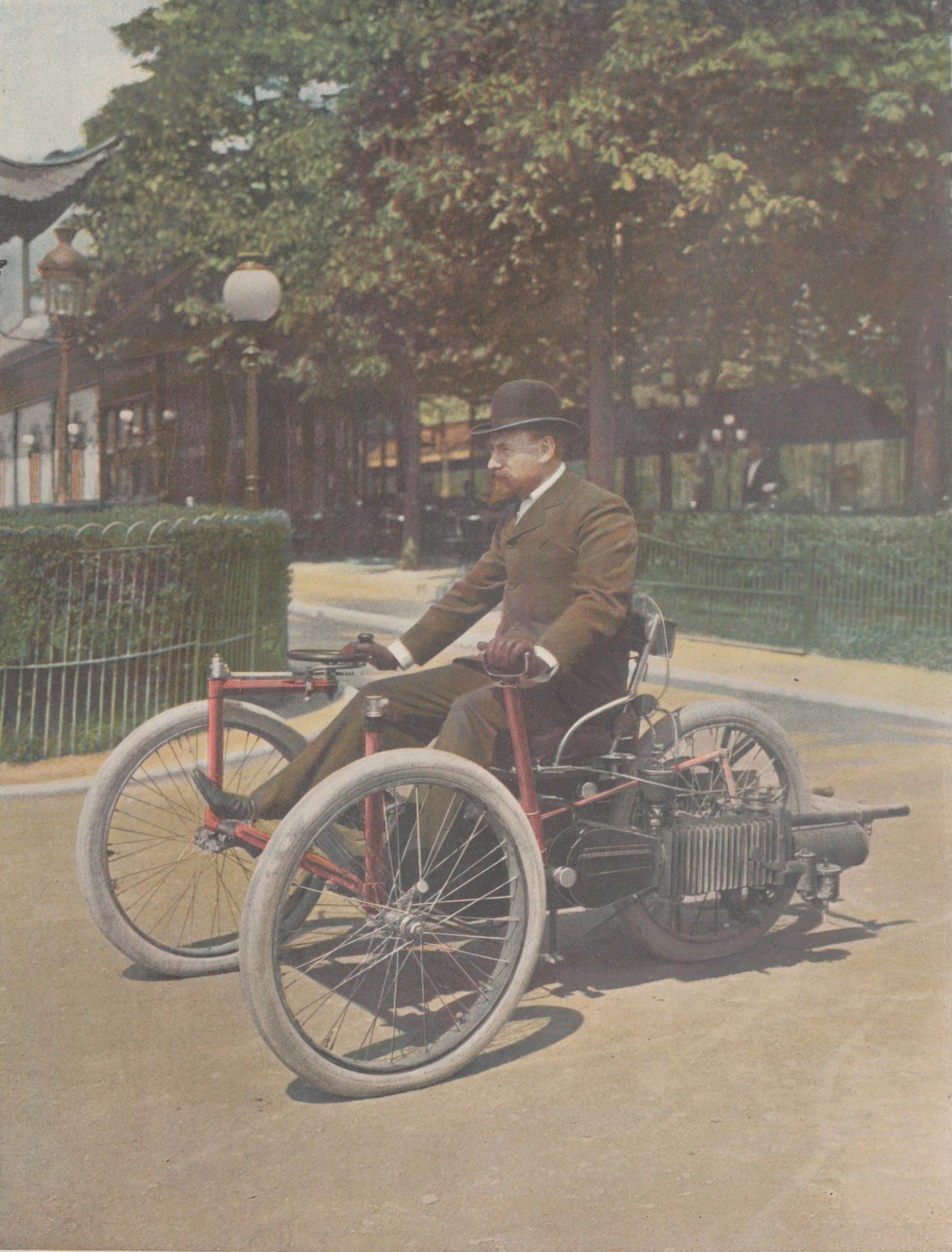