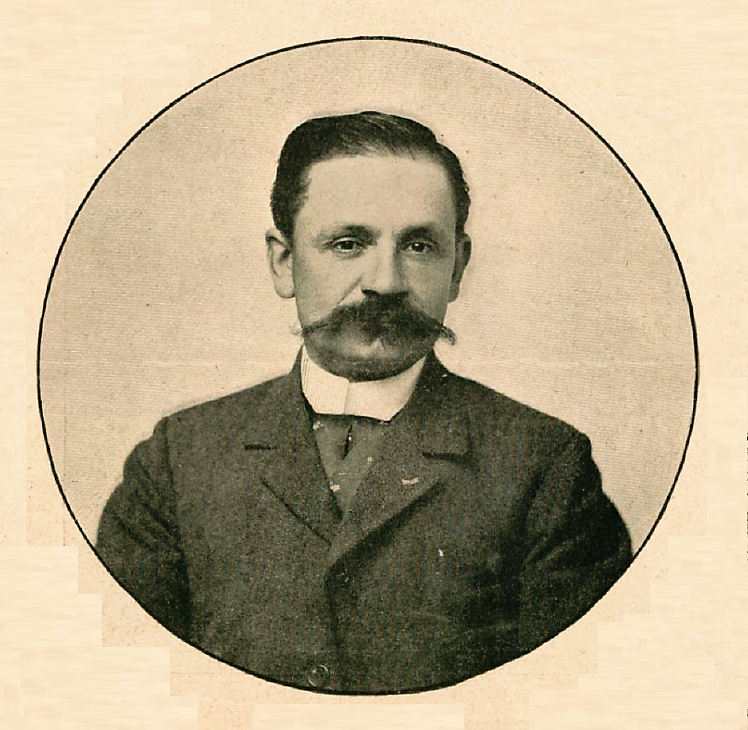 "An ingenious and practical engineer, Bouton made various mechanical devices, but it is claimed that from a clever toy came the associations which have resulted in the now famous firm, DeDion-Bouton, with which he is connected. It is said Compte De-Dion saw this toy and on asking for the maker, met Bouton. Thus came the partnership, in 1882, with Bouton and Trepardoux. Bouton made a steam tricycle in 1884, containing the remarkable light and efficient boiler of his invention, which for years remained the most important contribution of the firm to this art. In 1885 a quadricycle was made, and the success attending the runs made with this, in which Merrelle co-operated, was such as to bring forth the personal ideas of De Dion in so strong a manner that Trepardoux and Merrelle severed their connections with the firm.

The real beginning of the work of this firm was in 1884, and the several years following saw the production of numerous steam machines, including phaetons, dog carts, and a variety of other types.

Even as late as 1897 heavy steam chars-bancs were made by them, and that year also saw their well known thirty-five-passenger, six-wheeled coach, Pauline, on the streets of Paris- a vehicle which cost over twenty-six thousand francs, and had a thirty five horse-power steam tractor. This vehicle had been preceded by a somewhat similar one constructed in 1893 on the old idea of a mechanical horse attached to an ordinary 'bus body from which the front wheels had been removed.

In 1895, DeDion-Bouton produced their first liquid hydro-carbon engine vehicle a tricycle with aircooled motor and dry-battery ignition, which is so well known to everyone in the industry to-day. These were manufactured in large numbers, and were followed by larger gasoline vehicles into which they introduced their engine, namely, a vertical position. In 1899, their three-passenger, four-wheeled vehicle, and in 1900 a six-passenger vehicle, made good reputations. Since then their large factory at Putaux, France, well known under the name of DeDion-Bouton et Cie, has been continually crowded with work on vehicles, and with the manufacture of their motors which are still sold independently to other makers in France, as well as in other countries.

In fact the manufacture of engines and parts might be said to be now their main work."

"As unlike the modest and thoroughly honest man from Le Mans as it is possible to imagine, and without experience either as a businessman or an inventor, de Dion was a playboy aristocrat with a passion for machines and publicity. After more than a dozen of false starts and failures, he finally built up an important firm from nothing and took a leading part in organizing the infant automobile industry and popularizing its product. From the provincial nobility, Albert de Dion was born in Nantes in 1856. An uncle, Henri, had won some note as an engineer and promoted the use of iron bridges during the Second Empire. Albert eventually continued this interest in mechanical matters, but in his young manhood his activities as a Parisian boulevardier overshadowed such concerns. Of huge stature and commanding presence, a member of the fashionable Jockey Club, he lived well: gambling, dueling, and dallying with the ladies. The story goes that the Comte once called upon a lady friend without previously notifying her.

Finding that she already was entertaining another gentleman, he grew so angry that he flung open her apartment's French windows and hurled all the room's furniture, including a piano, into the street below. He never lost his taste for direct action, nor for the ladies either. The Comte entered automobile history in 1881 when he noticed a toy steam engine in a Paris shop. It suggested the idea of making some steam tricycles and carriages with one or two seats. For this purpose he immediately hired the toy's makers, George Bouton and Trepardoux, two Parisian craftsmen. Over the next few years they made slow progress and had meager results: a few vehicles which in most respects did not achieve the technical success of Amélée Bollée several years earlier, although de Dion's tricycles were smaller and lighter than these predecessors. 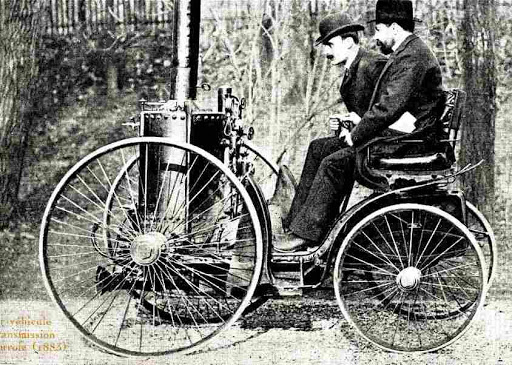 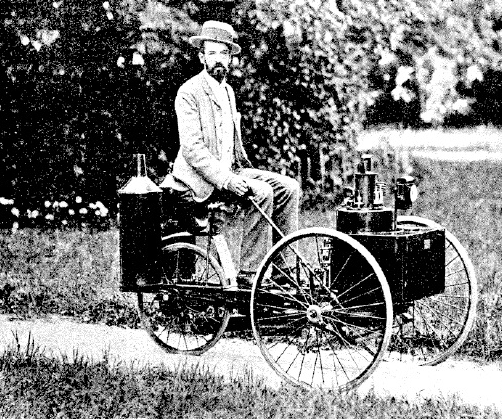 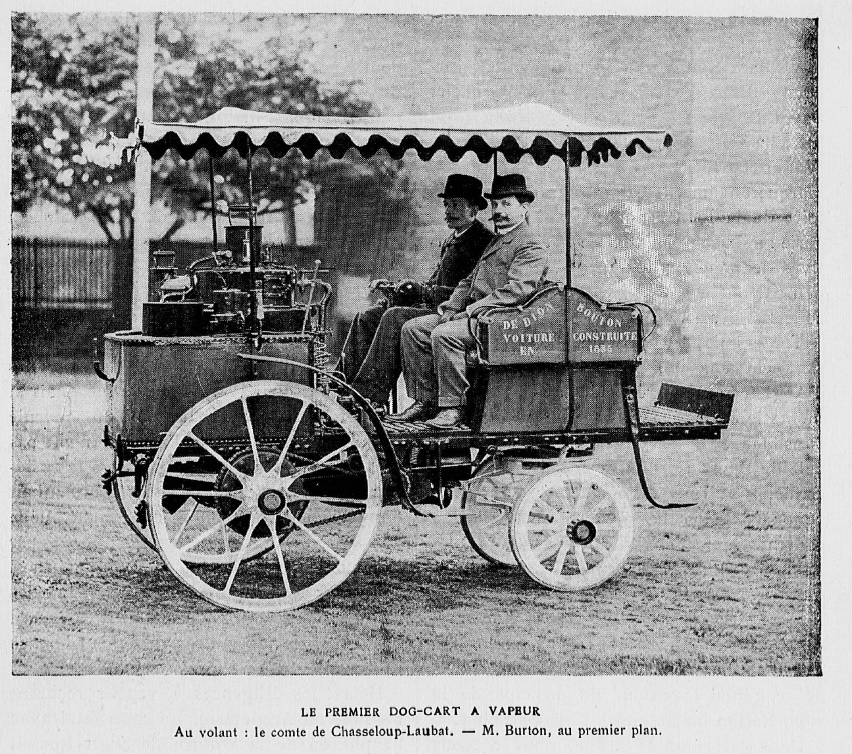 In 1888 the Comte tired of these playthings, sold out his equipment and manufacturing rights, and tried to interest the French Navy in his steam engines for use on torpedo boats. Failure here also brought him back to solid ground and in 1893 he and the faithful Bouton built another steamer with a new concept.

This was a tractor that would pull a carriage of the owner's choice. The most interesting feature of this tractor was a disposition that has since been known as the De Dion axle, by which each rear wheel was driven by a transversal shaft coming from the differential. Since road shocks would quickly destroy any rigid arrangement, each of the short transversal shafts was fitted with two universal joints. This permitted the elimination of the final chain drive and gave a low unsprang weight, but it was expensive.

While with the tractor-carriage de Dion moved into the class of big and expensive vehicles, at the same time he did not give up the idea of the small car. 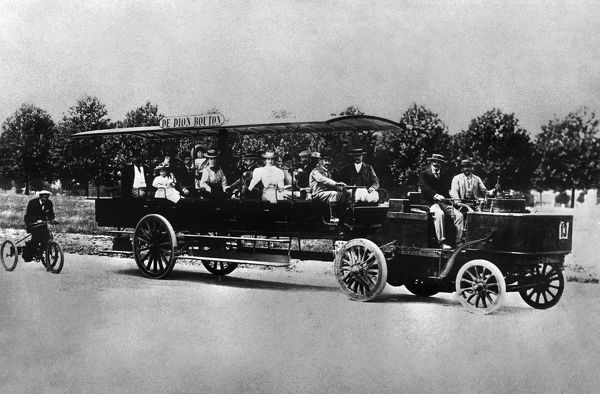 For in 1893 he got Georges Bouton to begin working on a small, high-speed petrol engine, apparently to compete with the Daimler type. After some two years of experimentation, Bouton came up with a remarkable breakthrough that established the true foundation stone for the famous firm. Meanwhile the third associate in the firm, Trepardoux, left the business at the end of 1893, a move traditionally ascribed to his opposition to any experiments with petrol engines. His departure required a reorganization of the partnership to include only the Comte and his ingenious colleague, under the name De Dion-Bouton."

One thought on “DE DION – BOUTON”