The vehicle which was so successfully driven by Count de Chasseloup-Laubat is illustrated herewith, and is of a type created last year by Messrs. Dion and Bouton, though in mechanical details it is absolutely the same thing as the famous steam tractor. The carriage has a seating capacity for six passengers, the driver and a workman. It is propelled by an engine of the compound type, and in normal working develops eighteen French horse-power, and an effective power of thirteen horse-power. By admitting high-pressure steam into both cylinders, the power can be increased up to thirty horse-power, but this is, of course, only used in starting and mounting gradients or in passing over roads that are in a particularly bad state of repair.

The engine is bolted on to the underframe, composed of light steel sections, which appear to give a perfect rigidity to the support for the mechanism. The cylinders, pistons, and gearing are entirely closed in a casting, which carries an oil bath, so that the cylinders and pistons are constantly lubricated. As the wheels are small in proportion to the size of the vehicle,  and the engine is placed above the axis of the hub, the driving axle is made in two parts with flexible joints, so that each is inclined from the engine to the hub of the wheel.

The boiler, which is placed in the forepart of the vehicle, is too well known to need extended description. 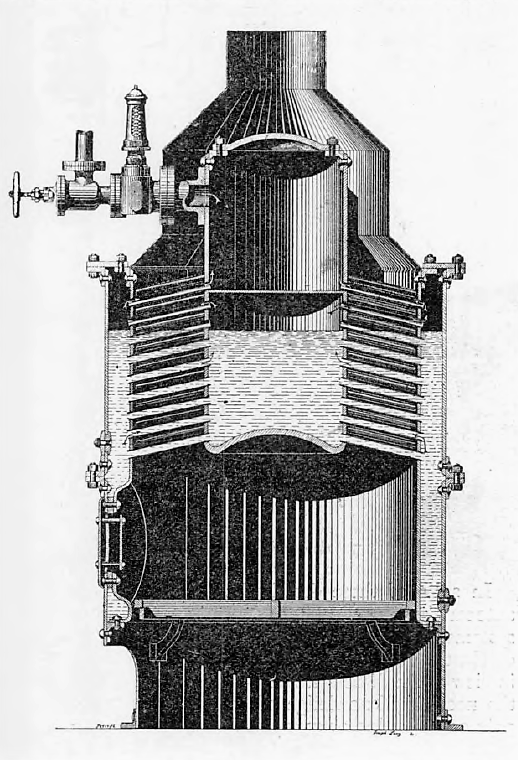 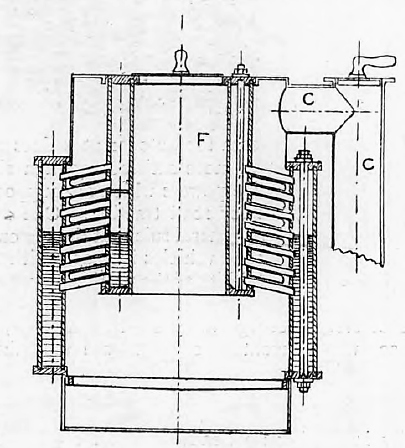 Of the vertical multitubular type it has been designed to give the greatest possible heating surface in the most compact form, and the rapid generation of steam makes it extremely powerful and altogether suitable for the heavier classes of vehicles. In fact, the employment of the boiler in a break of the description illustrated, has come as a revelation to most people who were under the impression that its scope was confined entirely to the steam tractor. The boiler is not only powerful but economical, and may run a considerable time without any attention being paid to it beyond the firing, Its efficient working depends, of course, mainly upon the cleverness of the driver, and we are informed that with proper care the tubes will not need cleaning more than once in a twelvemonth. It is true that proper care means the employment of pure water, and under the rear of the vehicle is carried a filter connected with a feed pipe to be used in the event of the water supply in country districts being found too heavily charged with organic matter. Usually the boiler is fed with a pump, but should this cease working from any cause, a Giffard injector is available. In fact, several of the more vital organs are duplicated with a view of reducing the risk of stranding through accident as much as possible. Thus there are two water gauges, two steam pipes working independently, and two brakes. The larger block illustrates the standard pattern boiler, and the smaller one the generator as adapted for autocar use, with top firing F and backward flue C C.

The fuel used for the furnace is coke, of which three hectoliters are carried in the case surrounding the boiler, and the reservoir in the body of the vehicle contains 250 litres of water, which is sufficient for a run of about eighty km. The vapour from the combustible escapes by the chimney rising to about the height of the boiler, while the exhaust is also carried away by the pipe shown underneath the rear of the vehicle.

The driver has the whole of the mechanism under perfect control, including a powerful brake on the back wheels, a rod for cleaning the cylinders from time to time when this is found to be necessary, a speed regulator, and the steering gear. The steering movement is transmitted from the vertical spindle by a horizontal rod to the front wheels in the ordinary way. The wheels are fitted with thick indiarubber tyres in cases where the wear and tear are not too considerable, but if the nature of the country in which the vehicle is intended to run should prove destructive to India rubber, iron tires are used. The weight of the vehicle illustrated is 2,500 kilos. and it will run at an average speed of from twenty-five km to thirty km an hour. The efficiency of the vehicle depends to a large extent upon the care taken in its construction, and the automatic lubrication of the mechanism, for which purpose oil is contained in one of the compartments of the case surrounding the boiler. In fact, the whole design and construction of the vehicle give evidence of extreme care and ingenuity, and the success of the Dion autocar in the late trials proves that steam can be employed with great advantage for vehicles carrying six or more persons.”