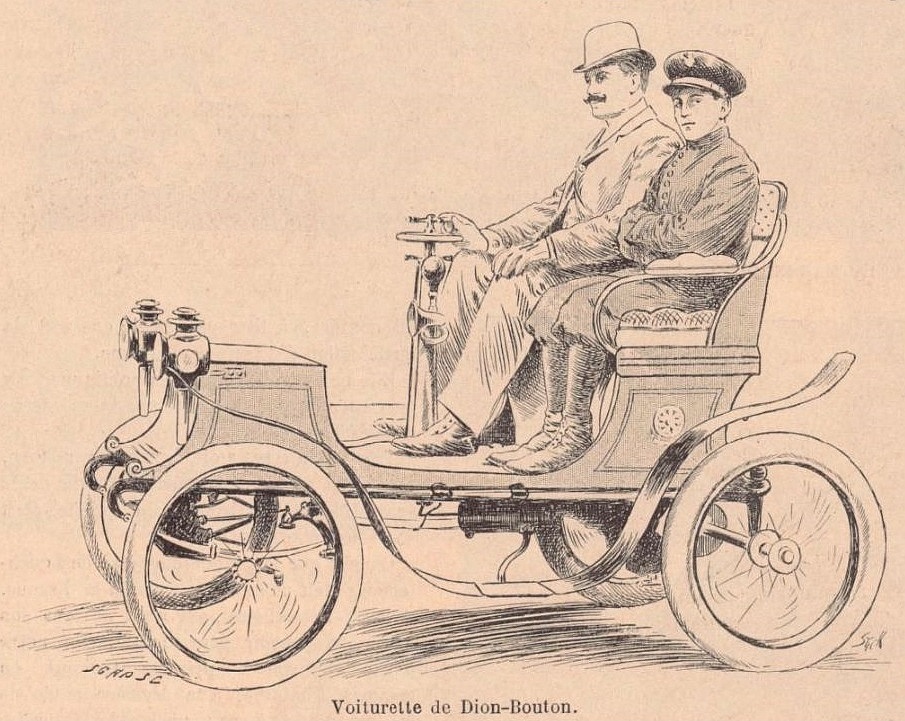 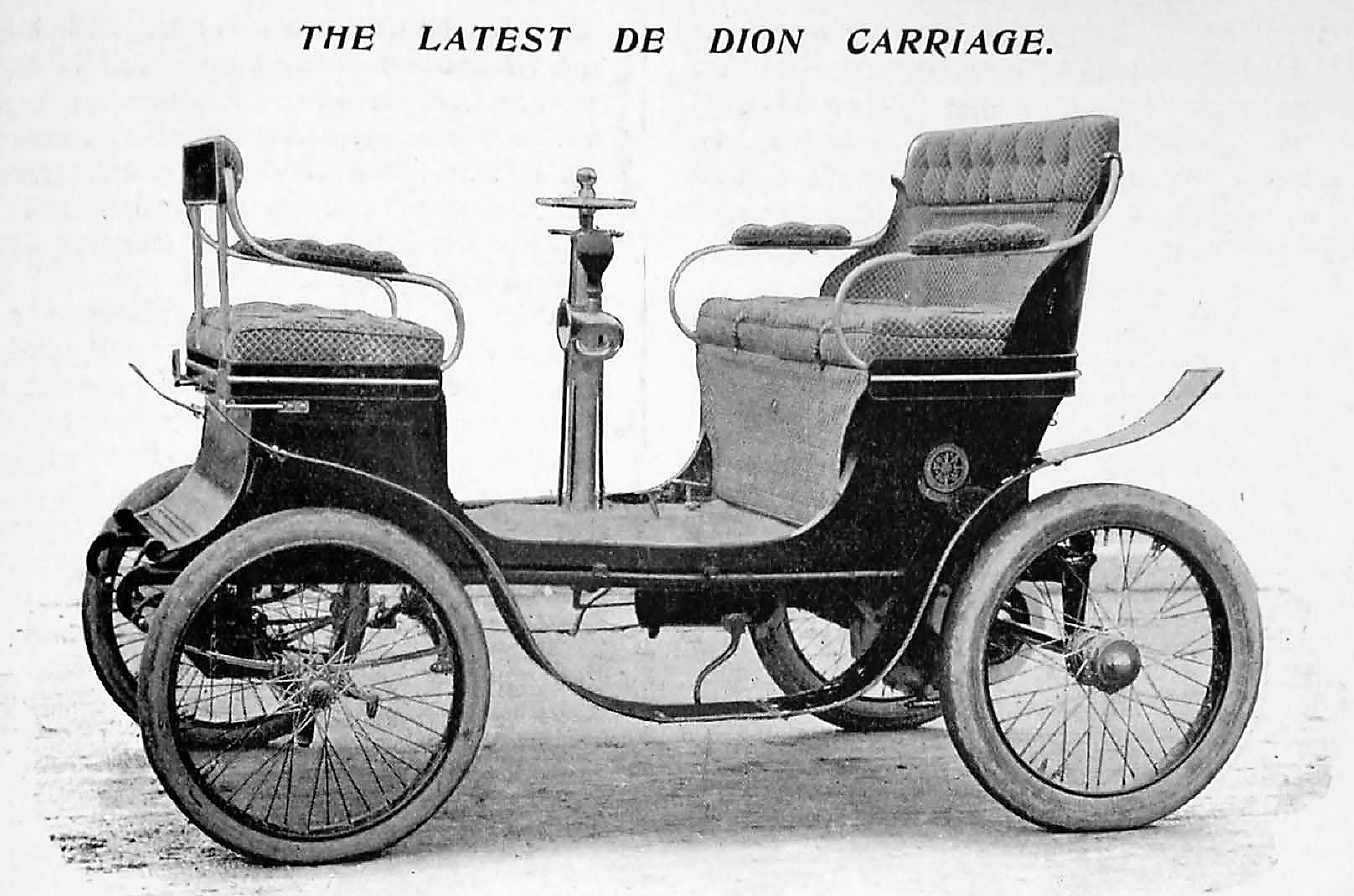 "Nearly two years have elapsed since MM. De Dion, Bouton, et Cie. commenced to make experiments on a small motor carriage to carry from two to four persons, and after practically throwing the better part of half a dozen cars upon the scrap-heap, they have within the last four months produced as the result of their experiments one of the most practical small motor carriages that has yet been put upon the market. The success of this little carriage is now assured, for almost all who have been given a practical trial have ordered, and orders for no less than one hundred carriages have been booked, with one-third in cash paid down with order, as is the custom in the French engineering and automobile industry. It is well to remark that it is the strict rule with Messrs. De Dion and Bouton not to place any motor or vehicle upon the market until they have perfectly satisfied themselves as is giving general satisfaction, hence the interest and belief which autocarists at large evince in the success of the little carriage under notice. This firm realized that a very extensive demand was rapidly growing in favor of a small carriage to seat two persons side by side, and scores of private people, as well as manufacturers of every description, have been making, or have made, a small carriage fitted with a one and three-quarter horse-power De Dion motor. We personally know of at least twenty various carriages of this description in Paris alone, but from one cause or another none of them have been deemed worthy of being manufactured in quantities.

It is obvious that the one and three quarter horsepower De Dion motor, although so successful for driving tricycles and tandem quadricycles on cycle lines, is not of sufficient power for a small comfortable carriage to carry two persons side by side.

In order to satisfy the enormous and growing demand for a more powerful motor on De Dion principles for use upon small carriages, this celebrated firm have been working for many months with experiments until they have now overcome the difficulties, so that they are able to put upon the market the type of motor so long sought after.

The motor for the small carriage under notice is three horse-power, fitted with radiating flanges for cooling purposes, but a small water jacket is fitted around the combustion chamber, and the circulation of water is assisted by a rotary pump, which drives the liquid through a set of radiating pipes fitted with gills. These ensure the circulation being constantly cooled to such a degree that it is never necessary to change or replenish water en route. This set of radiating pipes is fitted between the front wheels in

the best position to ensure the utmost refrigeration from the air. Only about a glassful of water is evaporated every one hundred kilometers (sixty-two and a quarter miles). The small carriage represented in our illustration is only in its experimental stage : as regards the seating part, as in the “voiturettes" supplied to customers the carriage body will be slung upon springs back and front.

All the mechanical portions, as well as the motor, are quite out of the experimental shop, and are already passing through the works in quantities. The frame-work is also decided upon, and only the carriage body will be improved before these vehicles are delivered to the public.

The whole mechanism is exceedingly simple. The motor is thrown in and out of gear by a friction clutch, which is manipulated from the wheel on the steering bar.

There are two definite speeds, giving twelve and thirty kilometers per hour, whilst the intermediate speeds can be regulated by the " advance sparking device. Toothed gear is used, neither belts nor chains being fitted. On the steering column is a cross-bar governing the steering by a rack and pinion, whilst just beneath a steel wheel serves for throwing the motor in and out of gear, and also for changing the speeds. By turning to the right, the highest gear is thrown in ; in the center the motor is out altogether, and turned to the left the slow speed is thrown in. There are no shocks or noise in changing, as the friction clutch and toothed gearing runs in an oil bath, and is easily worked without any possibility of jamming.

Lastly, two levers are fitted to the steering post, just above the wheel, for regulating the mixture of air and gas, also the advance sparking on similar lines to the De Dion tricycle.

A new carburetor is fitted to regulate the flow of spirit automatically. On the new model the wheels will be fitted on an axle with universal ball joints each side, as on the De Dion omnibus, so that all the road shocks will be modified. Large C springs will be employed, as well as transverse springs, in order to absorb vibration, and to ensure comfort to the person seated in the car. The four wheels are of equal diameter, and are fitted with large-sized pneumatic tires. Two powerful brakes are fitted, one to act upon the differential gear, and the other on the motor, so that the carriage can be instantly pulled up. One of the brakes is regulated by a pedal, as in the large motor cars, and which also throws the friction clutch out of gear, and the other pedal puts the brake on the differential gear, so that the carriage is under splendid control. The motor is placed at the rear, and the starting handle can be reached from the seat on the right side. Nothing is wanted to make this one of the most successful little carriages yet designed, and its popularity will be great when once it is upon the market, whilst its price will bring it within the means of many desirous of having a comfortable, elegant little car in which a lady and gentleman can drive anywhere, accompanied by, say, a couple of small children on the front seat, or on- which they can take a moderate amount of luggage if on touring intent.

The price (including British motor license plate) will be 175 pounds without springs at back. With C springs at the rear of body it will be 190 pounds. Several of these carriages have already ordered from England, simply upon the reputation of the De Dion Co." 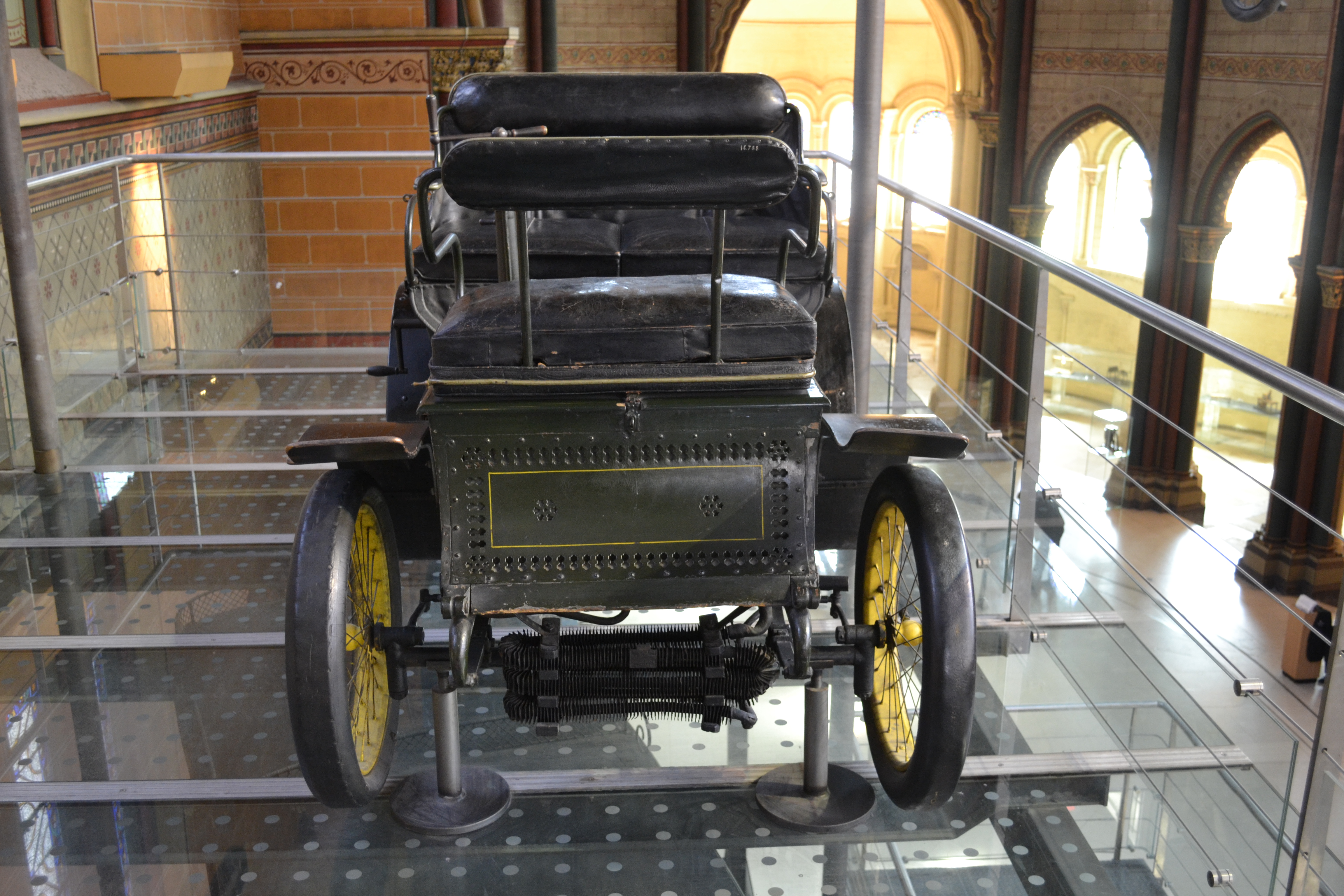 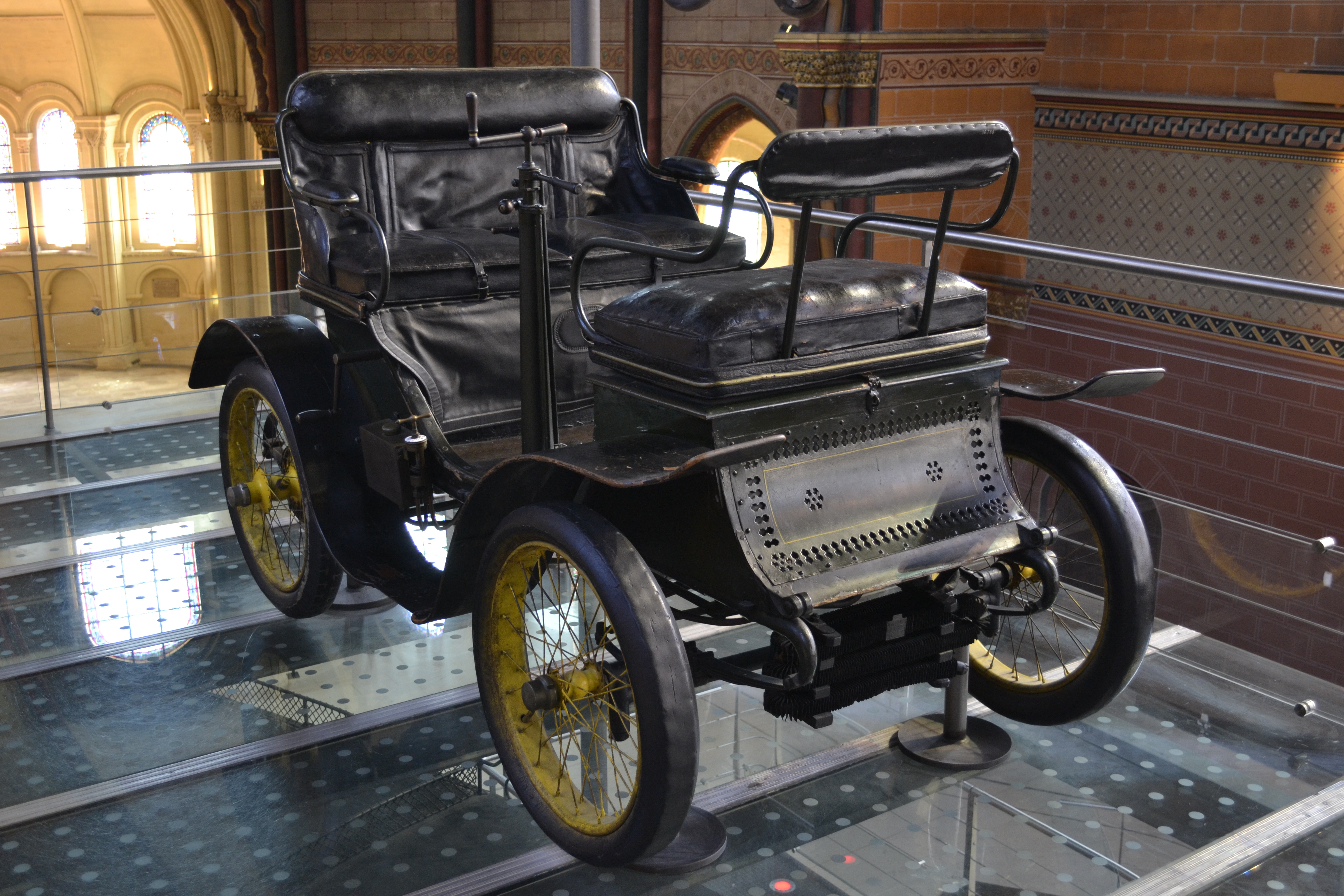 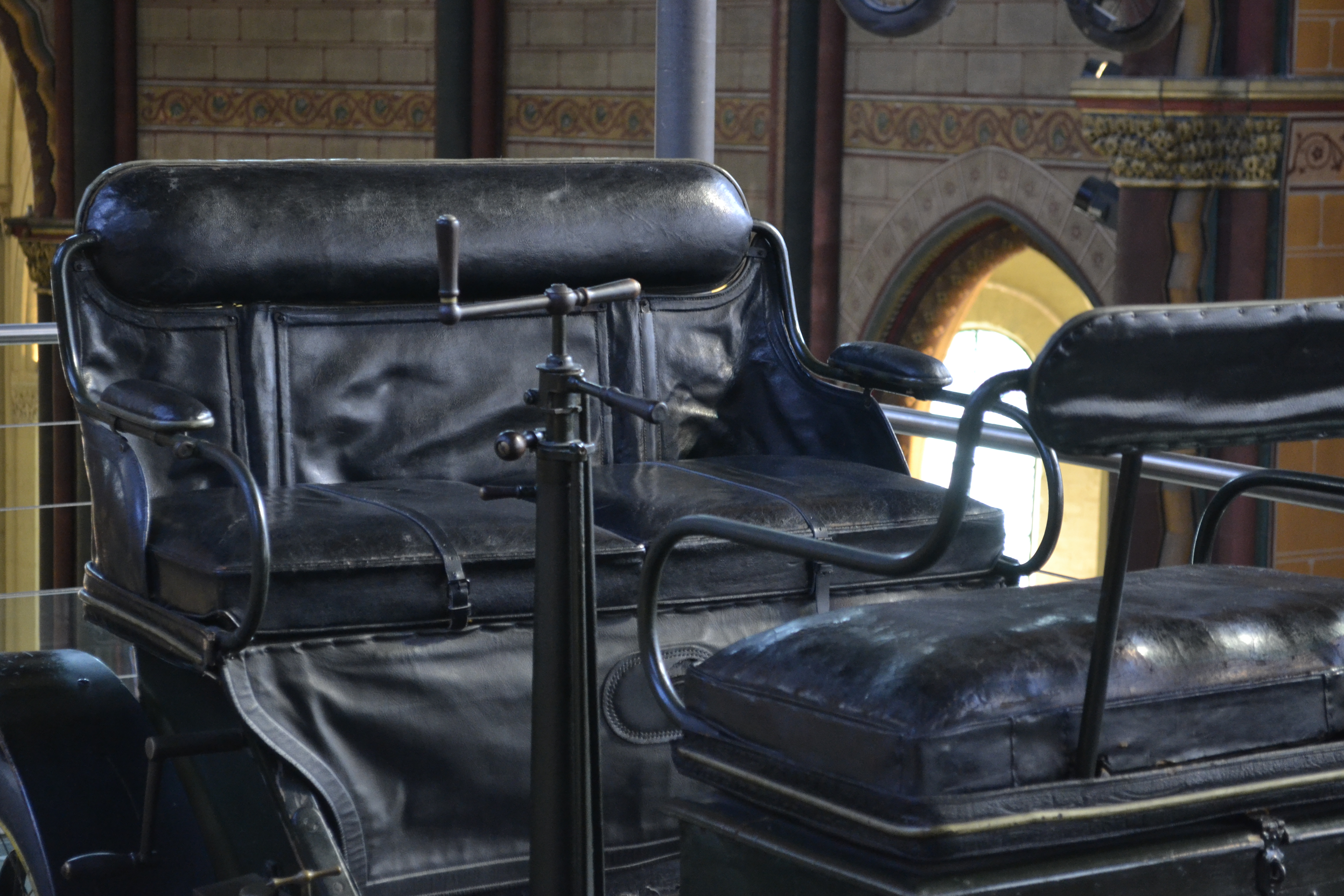