In February of 1890 Levassor started to study a second car, “dog-cart” type. The car was lighter and equipped with a larger Daimler engine P2D N48 (displacement of 1025 cm3, 2 HP ¾) placed no longer at the center, but almost on the rear axle, resulting in a noticeable reduction in the position of the two possible passenger at the rear. The power of the engine did not allow for the weight of four passengers so Levassor gave up some of the rear passenger space. The steering was arranged by two pivots with split coupling bar. The tiller column ended with a pair of tweezers springs that rotated with it. This second car gave Levassor a lot of satisfaction. It weighed about a ton. 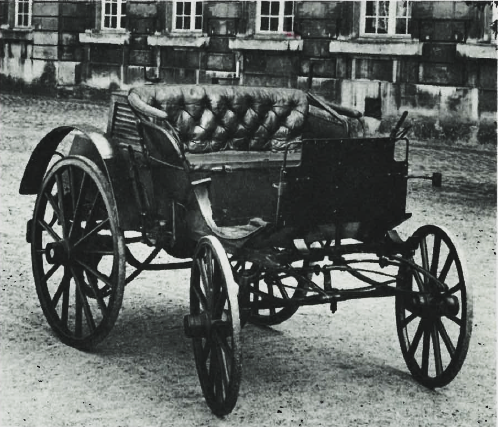 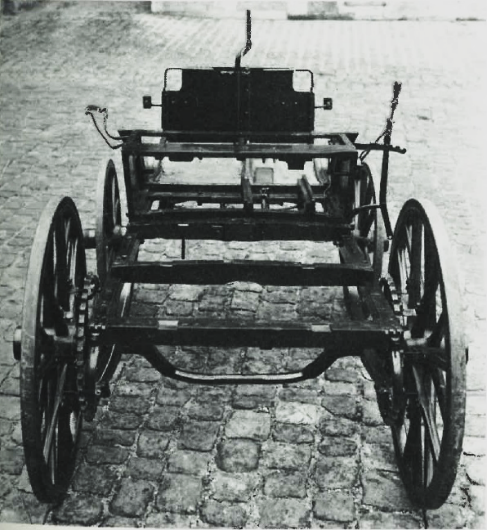 It was ready to go on June 20, 1891 and   Levassor decided to take a long trip from Paris to Etretat where his wife Louise possessed a villa.  On July 31, 1891 at 4.50AM, Emile Levassor left avenue d’Ivry heading to Etretat with his companion in this car. The rain was falling hard. At a quarter to one the travelers stopped at Vernon for a quick lunch. They had covered 81 km in just under eight hours. The rain was still falling. Finally, at 8PM they stopped at Rouen for the night. They had travelled 138 km. Fortunately, the weather was better the next day. The departure was delayed because Levassor must start by getting the gasoline at the grocery store. They finally left at 8.05AM and arrived at Etrerat at 6.45PM.They had covered 225 km in 23 hours, so their approximate speed was 10 km/h. Their goal had been achieved.

The most important achievement of this year was the construction of the third prototype, which became a production car.

The first parts (shafts) of a future serial car were drawn on February 15, 1890. The complete assembly drawing was ready on January 12, 1891. Levassor invented the completely new concept of that model. First of all, he put the engine in the front of the car.  Levassor did not leave any documents about his significant decision.

Arthur Krebs, the General Manager of Panhard & Levassor from 1897 to 1916, said: “The engines were always placed in the front, that arrangement having been adopted by the Panhard & Levassor after the very first trials, because it offered an easy way to inspect the engine and permitted while engine running and the ability to regulate the carburetor if needed.”

The underframe consists of a rectangular structure of wood encased in channel iron and two longitudinal channel bars, bolted to hangers in front and to the flat iron crossbar at the back.

The chassis is supported on four wheels by means of leaf springs forming the elastic suspension. The car got an engine P2C version (2-cylinders V-type, 70x106, displacement of 817 cm3, 1¾ HP 750 RPM).

Nick Georgano wrote, “The engine was mounted at the front of the chassis, and protected from the elements by a box which the French called “un capot”, translated into English as “bonnet” and always called by Americans a “hood”. The crankshaft was longitudinal – parallel to the chassis frame – and necessitated a bevel gear to turn the drive through 90° to power the rear axle. The advantage of a longitudinal engine is that, as the number of cylinders grows, they can be accommodated by increasing the length of the bonnet, whereas a transverse engine is limited to four cylinders at the most. Just as revolutionary as the engine position was transmission. Rather than the belt and pulleys inherited from stationary engine technology, Levassor used a sliding pinion system in which gear wheels meshed with others of different sizes to give three forward speeds. It would not be correct to call this a gearbox, as the gears were not enclosed; instead they were lubricated, in the inimitable words of the English historian Anthony Bird, “by grease, road dust and optimism in equal proportions”. From the output gear shaft, the drive was taken to a bevel-geared countershaft, and thence by chain to a differential-equipped rear axle.”

In August 1891, Panhard & Levassor issued the first catalogue that offered a two-seater car with a Daimler engine described above. It may be considered as the first car catalogue in the history.

Summarizing the qualities of the car, the description in the catalogue, read “It is comfortable and very stable. The engine is lightweight and easy to maintain. It does not smell, the start is very fast, it is easy maneuvers, stop instantly and is very safe. Engine monitoring is almost unnecessary; its carburetor being filled, we do not have to worry for an hour and a half. The expense is very low and you can take a very long drive with a small amount of gasoline and less weight.” The price was 3700 francs.