This is a story about the adventures of the French motorist Janne de Lamare (a member of Automobile Club of France) and his friend Raphael Merville  in the frozen lakes and rivers of Alaska using a small car – Bollee tricycle.

“When the little coasting steamer ” Cutch ” left Vancouver on one of her regular voyages to Skaguay last March, her manifest bore an item which had never appeared there before. It was one automobile, of which Monsieur E. Janne de Lamare was consignor and consignee. After the ship’s arrival at Skaguay the cargo was transferred to the freight-cars of the new Yukon and White Pass Railroad, and a few days later the first automobile in Alaska rolled out upon the ice-crusted lake at Bennett. The machine carried two persons, one being Mr. de Lamare, who owns one-third of the town site of Atlin, B. C., the other his friend-chauffeur, Mr. Raphael Merville, a young French record-making motor-cyclist of last year. Mr. de Lamare and his friend returned to Alaska from the United States after developing a long cherished plan for the employment of an automobile as the method of rapid transit to the Klondike.

As he had traversed three times previously the 640 miles which separate Bennett from Dawson City, Mr. de Lamare entertained no illusions in undertaking the journey in an automobile. In point of fact, after a review of the situation, embracing the low and limited construction of their vehicle and the arrival of an unusually early northern season, both adventurers entertained considerable doubt as to the complete success of their expedition. The arctic automobilists arrived in Bennett the last part of March, and though the thaw in former years did not begin until the middle of May, they learned that many of the streams further north were beginning to break. This was unwelcome news, as the Fifty Mile river, which lay in that direction, had been chosen as the best automobile course northward after leaving Lake Tagish. 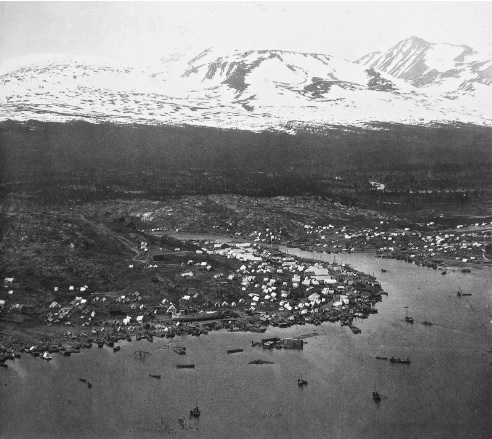 The itinerary from Bennett follows : North Lake Bennett to Cariboo Crossing, situated at the end of Lake Bennett, to Windy Arm, to Naies Lake; thence to Tagish Lake; thence to Tagish, at which point the Fifty Mile river enters Lake Tagish, northward on the Fifty Mile river to Miles Canon Pass, to White Horse Rapids, which never freeze. The route continues to Lake Lebarge, to Lewes river, by which Fort Selkirk, the future official capital of the Yukon Territory, is reached. From Fort Selkirk the course is over the Yukon river, by which the voyagers intended to descend to Dawson City. 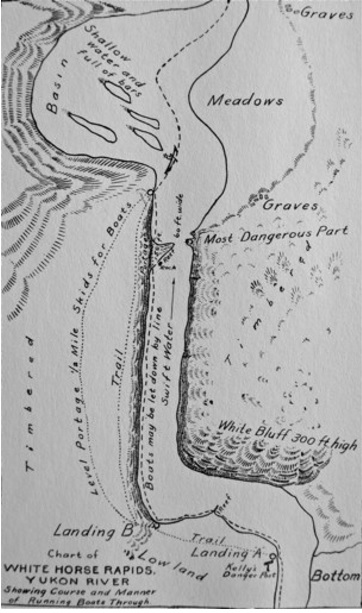 The machine employed in the experiment was a tricycle voiturette of the Bolleé type of 3 3/4 horsepower. The vehicle, which may answer all requirements on a good road and in a milder climate, failed to realize all that was expected of it in the Alaskan journey. As mentioned above, the carriage was low in construction, the footboard of the trailer and the motor, which was attached to the rear wheel, being within a few inches of the traction-base.

After a few days in Bennett the chauffeurs left the little mushroom city followed by the shouts and the ” good lucks of the townspeople, who turned out en masse to watch the start of the carriage. Learning of the open condition of the streams in the upper country, Mr. de Lamare found it necessary to change his original plans.

It was at first intended that the commissariat and supply of fuel should be drawn on a sled attached to the rear of the machine. With a view to the probable speed of the vehicle and the unusually bad condition of the route, this plan was abandoned as impracticable. It was then proposed to proceed without the supply of provisions and depend on a possible meeting with prospectors or Indians, but that plan also was put aside, as the store of gasoline was not to be ignored. As there was not an inch of unused space on the carriage the chauffeurs were compelled to engage a native with sled and dogs to follow with the provisions and fuel as best he might.

For the first few miles the lake-trail was good, and it was not until the vehicle had covered 15 miles did the suggestion of sub subsequent difficulty present itself. At this distance from Bennett the trouble of the chauffeurs began. Huge snow-drifts which freezing under a temperature of 52 degrees below zero at night became brittle on the crust under the sun’s rays. In some places where the snow had been blown away, leaving the ice visible, water to the depth of two and sometimes three inches was encountered. 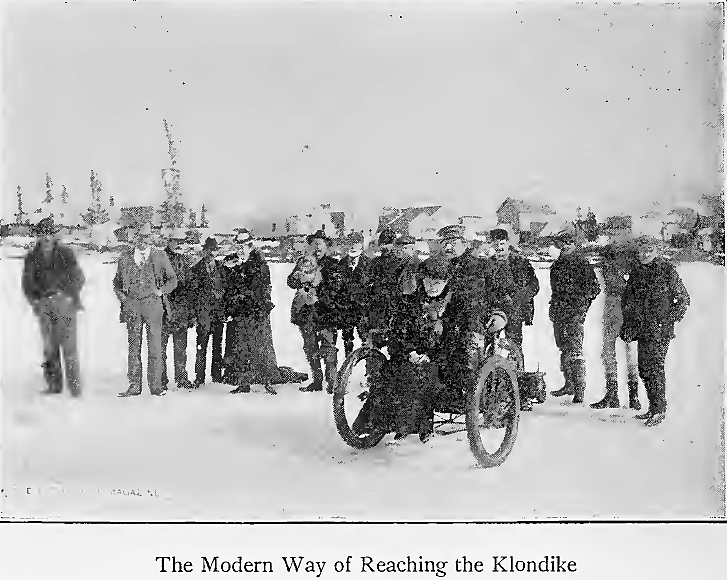 But in spite of these obstacles the little machine maintained a speed of 15 miles an hour. The uneven trail made by the half frozen drifts caused the vehicle to ” kick ” and ” skate, ” performances holding forth no bright promise for the long survival of the motor. After many shocks and jars, each of which seeming to be the last, the chauffeurs reduced the speed of the carriage one-half. The trail became worse and worse, and when the expedition had put 22 miles behind, the solder broke away from a portion of the gasoline conduit, which was swathed in strips of flannel to exclude the cold. A leak resulted, and the fluid running out on the fabric took fire. This necessitated a stop, and by the use of snow the flame was extinguished. As there was no solder at hand to repair the rapture, the repair was made by winding wire around the injured portion. This operation occupied two and a half hours, after which the outfit slowly and proceeded to Cariboo Crossing, 28 miles from Bennett, arriving five hours later. At Cariboo Crossing a blacksmith was found and the machine was repaired a la Klondike. At this point Mr. Merville, who, suffering from exposure resulting from the halt for repairs on the lake, fell ill, and the adventurers remained at Cariboo Crossing for the night.

During the night the commissariat came up and Mr. Merville having recovered sufficiently to proceed the expedition set out on the following morning on the second stage of their journey. Though the running during the day cannot be described as ” smooth, ” the trail was not as slushy as that of the previous day. Passing Windy Arm, which is a small peninsular a few miles north of Cariboo Crossing, the chauffeurs drove out across Naies Lake, which, at its northern extremity, joins Taku Lake in the east and Lake in the west. Few of the motor-wrenching hillocks of the day before were encountered on Naies Lake, and for the greater part of the way its surface was as smooth as glass. Due to a lowering of the temperature the pneumatic tires remained dry, and the adjustment to the fore-wheels of a novel set of runners, included in the outfit, was found to be unnecessary.

Though Mr. de Lamare was in possession of knowledge concerning the probable condition of the Fifty Mile river, he hoped to reach it before a thaw, making auto-navigation impossible, began in earnest. Therefore on reaching Tagish, after a rough and eventful journey across Lake Tagish, the voyagers were downcast on finding the river, which enters the lake at that point, open. This circumstance having defeated their purpose to reach Dawson, the intrepid chauffeurs determined to subject the machine to a further test by essaying a journey to Atlin, 83 miles from Tagish. Leaving Tagish the duo turned eastward, returning by the old trail to Naies Lake. Crossing Naies Lake they entered Taku Lake. The trail improved as they proceeded, and during the night the machine at some points maintained a speed of 40 miles an hour by moonlight.

Golden Gate, a small place situated on the west side of a peninsular separating Taku Lake from Atlin Lake, was the first objective point of the adventurers.

Fifty miles had been covered, and at a time when the journey promised to be speedily accomplished the cap of the motor’s carburetor became dislodged and was lost on the trail without provisions and unable to proceed with the vehicle, the chauffeurs waited thirty-six hours for the commissariat to come up. After its arrival temporary repairs were made and they proceeded at a reduced speed to Golden Gate. From Golden Gate the trail on Atlin Lake was good, and on the 4th of April the automobile arrived in Atlin. 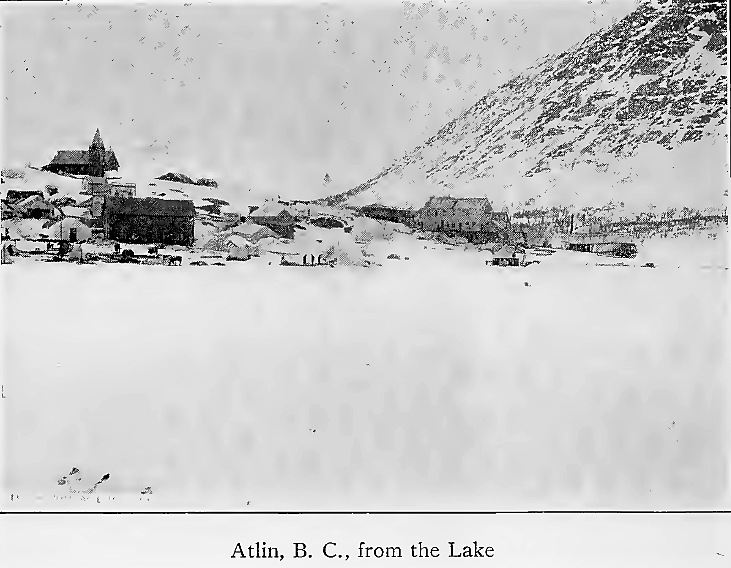 In Atlin the machine was overhauled, and a few days later the started on the return trip to Bennett, where they arrived after a passage no less eventful than the trip out.

The expedition was purely an experiment, and as such it cannot be said that it is without its good results. Before his departure for Paris, Mr. de Lamare made the statement that next year, in an automobile of 6 to 8 horsepower, of American manufacture, he will experience no difficulty covering the 640 miles between Bennett and Dawson City in forty-eight hours.” 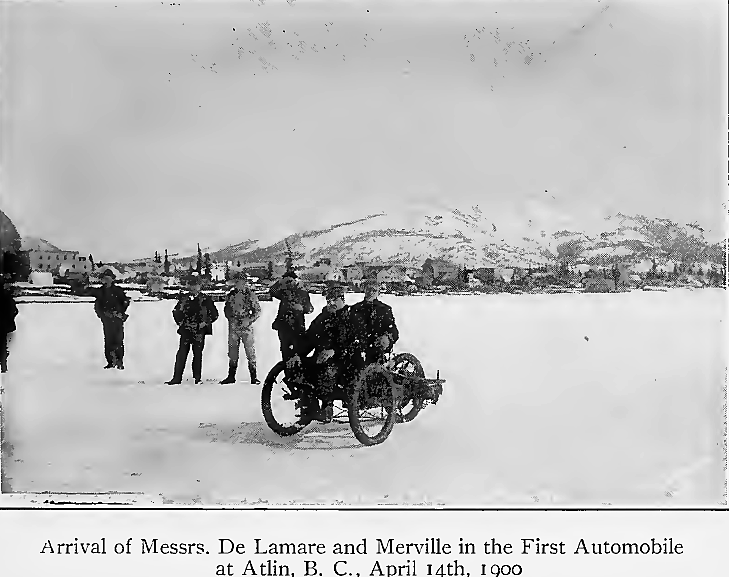 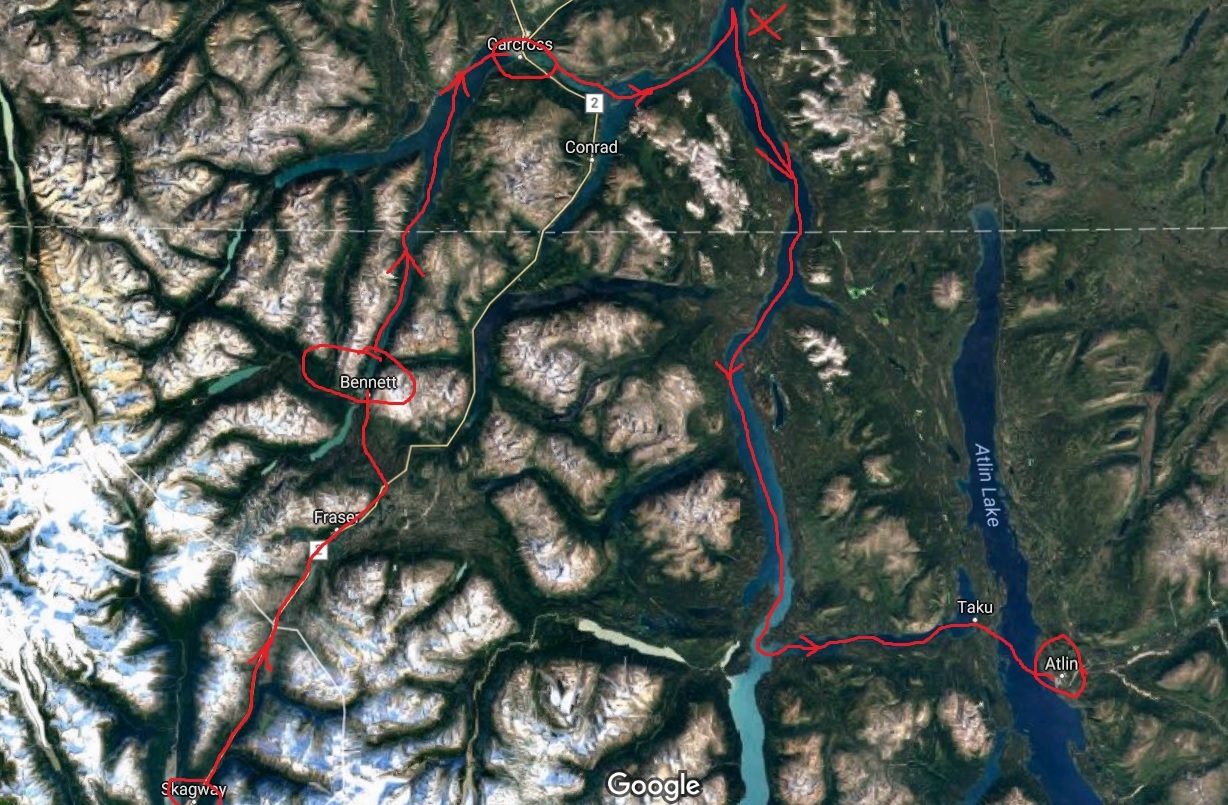