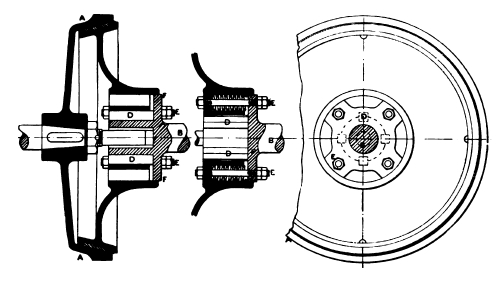 The cone clutch A is shown in the picture. The hollow cone A is keyed upon the motor shaft. The inner cone C is secured to the clutch shaft в by four large feather-keys D, which permit it to move on the shaft. At a larger radius are four bolts e, which pass through the flange f at the end of the shaft, and through the inner face of the inner cone, in each case through holes nearly a fit with the bolts. Within the casting forming the inner cone the holes for these bolts are enlarged so as to accommodate strong spiral springs of short range, these springs pushing against the bottom of the enlarged holes, and against the flange f. When the two conical faces of the cone, which are leather-covered, first come into contact, they do so under the pressure of these four springs, so that only a part of the total pressure is brought into use at first, the object being to secure a gentle preliminary action, as and for the purposes already described with reference to the English Daimler motor cars. The additional pressure is put on by the spring at the end of the clutch shaft when the pedal is completely released. It will be seen that the end of the motor shaft is enlarged, and receives a bush, shown white, in which the end of the clutch shaft runs.