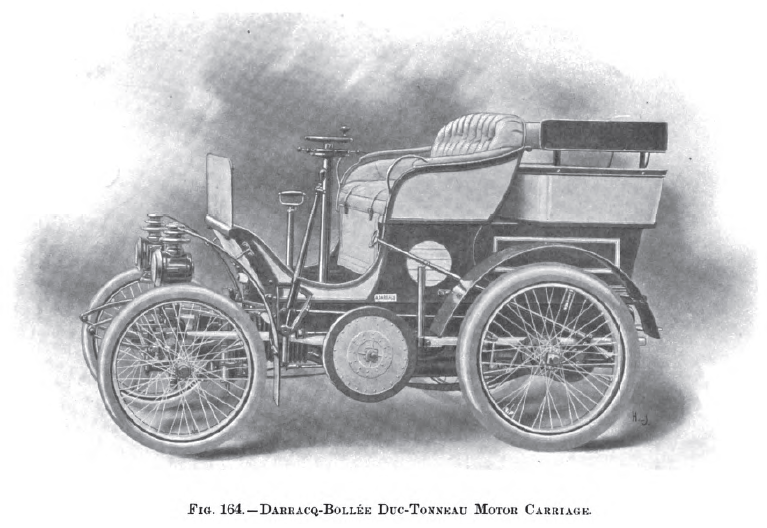 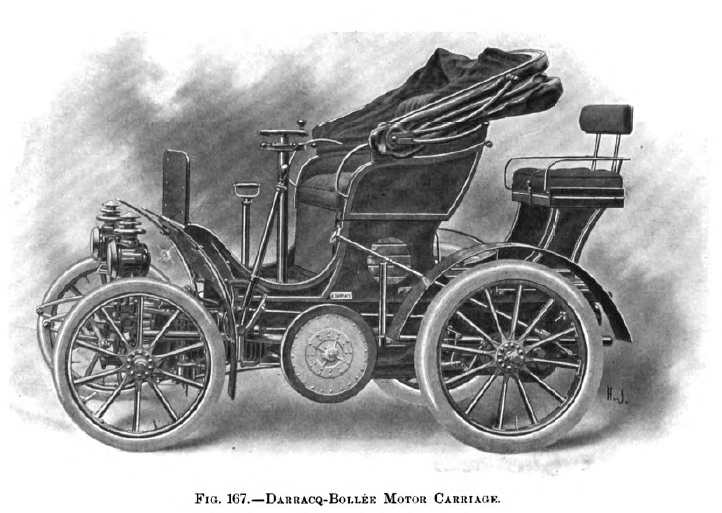 The cars illustrated by Figs. 164-167 are made by MM. A. Darracq & Co. from the designs of M. Leon Bollée, whose name has been so well and long known as that of an original designer of motor vehicles. Figs. 164 and 167 show carriages with two different forms of bodies, which are known as the Duc-Tonneau and the Duc-Darracq respectively. Both are carried by precisely the same under frame, gear, and motor, the arrangement of which is shown by Figs. 165 and 166, which are respectively views of the whole of the working parts from above and from below.

The motor, which is started by a handle on the fly wheel on the near side of the frame, is a modification of the well-known Bollée form, having a single air-cooled ribbed cylinder, on the single-way crankshaft of which is a five-cone pulley C, with epicyclic reversing gear at the fly wheel at one end. A crank arm in line with the crankshaft proper is driven by the crank pin for giving motion to a governor. A float-feed carburetor is used, and tube ignition at B.

From the cone c on the crankshaft, motion is conveyed to a second motion shaft behind the main axle, there being on this shaft a corresponding five-cone pulley e, a clutch S, and a pinion gearing with a differential gear, within the case G. The bell is shifted from pulley to pulley by a belt striker mounted on an inclined axis which is seen in Fig. 166, one end of the striker being seen in that same figure, and the other end in Fig. 165. This striker is operated from the hand wheel a, under which will be seen a disc d, having five small projections. This disc and the hand steering wheel are clearly shown in the perspective view, Fig. 164. By lifting this disc and turning it to either of five positions, motion is conveyed by a pitch chain on a sprocket wheel at the end of the steering pillar, and this conveys motion to the wheel d’, Fig. 166. This in turn, by the rack shown, gives motion to the belt-striker arm, the bearing or pivot of which being inclined causes the strikers to follow the taper of the cone pulleys in the opposite directions, hence the belt is easily shifted for either of the five speeds.

The steering arrangements will be easily seen from Figs. 164, 165 and 166, a rod with a rack, actuated by a pinion at the bottom of the spindle on which is a steering wheel a, giving motion to a bell crank arm and a connecting rod D. 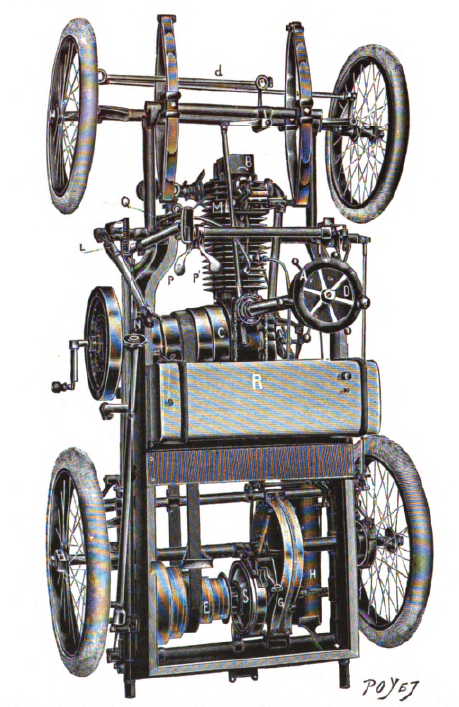 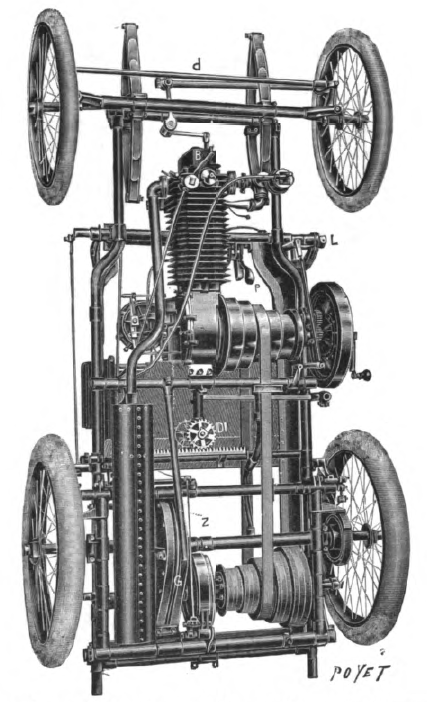 This rod connects the two arms on the short steering axles. There are two pedals P P’, one of which actuates a pair of hand brakes, one near either driving axle and the other for actuating the main clutch for varying speed, or slowing, stopping, or changing speed. At Q is seen the lever by means of which the epicyclic gear near the fly wheel is operated. The lever l actuates the brake upon the outside of the clutch body. Diagonally placed on the same side as the fly wheel is a rod with a screwed end actuating a sliding carriage by means of which may be varied within a small range the distance of second motion and driving axle from the crankshaft for tightening the belt. The silencer is seen at H. The motor is 5 HP. and runs at 800 revolutions per minute. It is arranged where it is easily accessible, but requires more covering in than it, as an air-cooled motor, is likely to get. The arrangement of the machinery, the adoption of five-cone palleys and means of striking a belt thereon, present several points of much interest, and very comfortable carriages of various designs are adapted to the one form of underframe and gearing shown. Sufficient time has not elapsed, however, to permit reference to experience with them.