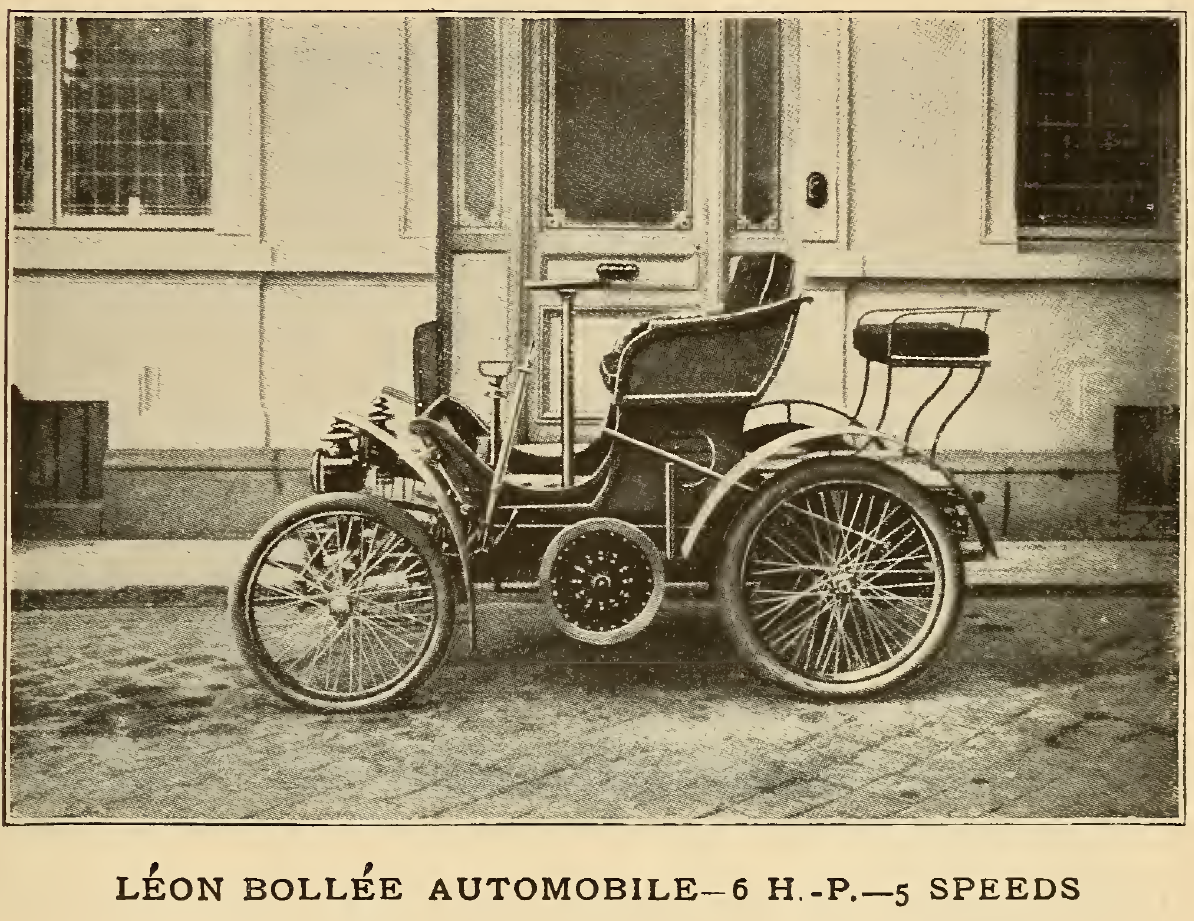 "The factory in Suresnes built a series of 500 cars according to the latest Léon Bollée patents. 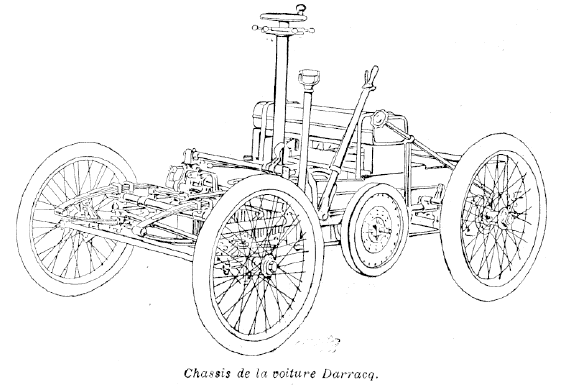 The pictures show that these light cars retain the unobstructed appearance of the "voiturette", while being more stable on its 4 wheels, giving an impression of elegance that the primitive cart from Bollée did not have, rather suited for racing and the records.

The factory itself (which is remarkably arranged and equipped) provides exactly calibrated and interchangeable parts for this assembly, the finish of which equals that of the parts made by hand. 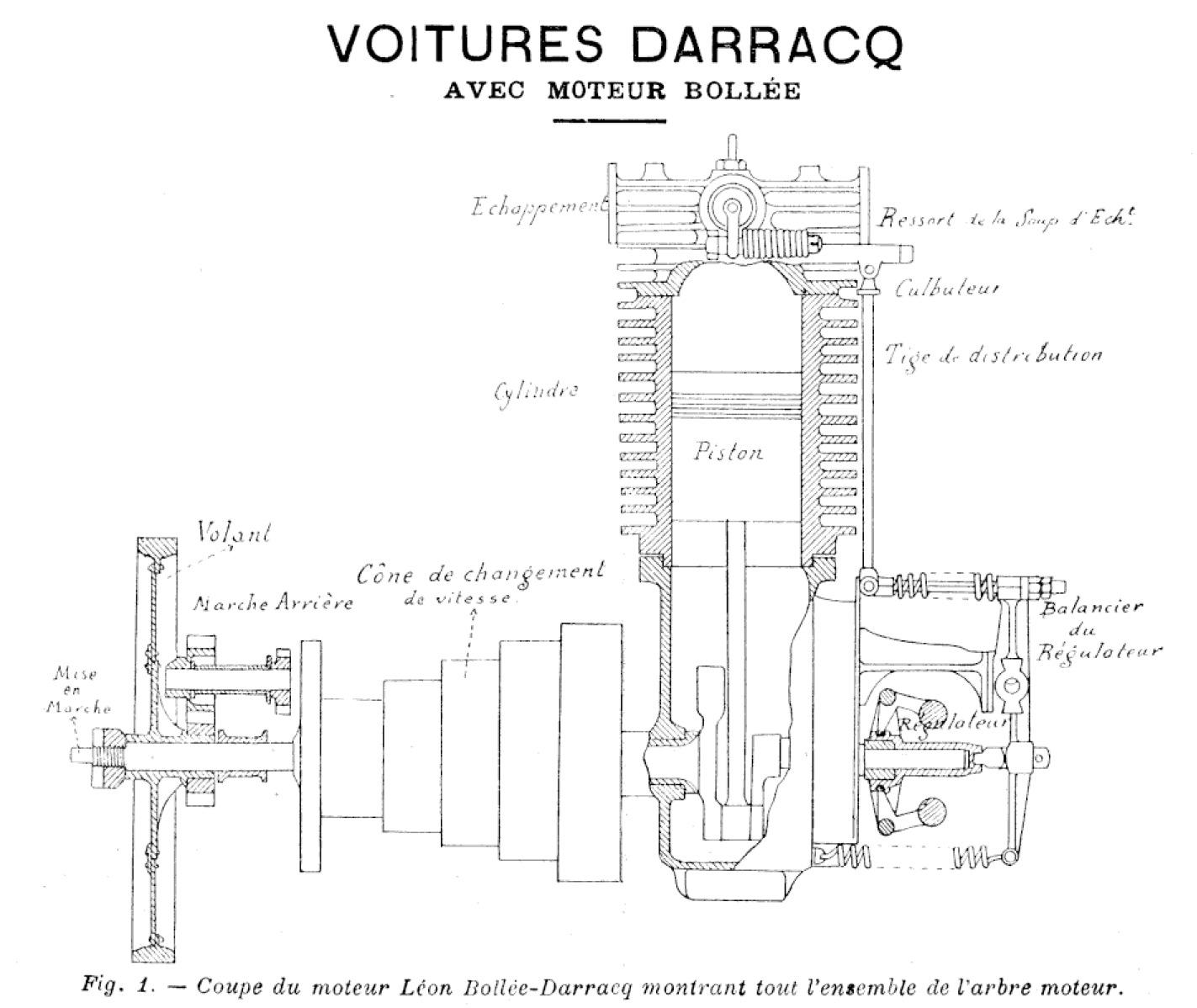 The engine of these cars is horizontal, with a single cylinder, and carries cooling fins, although developing about 5 horsepower: it is always placed at the front of the car so that the displaced air hastens cooling. Our figures 1 and 2 show that the intake valve is automatic and that the exhaust valve is raised mechanically by the action of a cam acting on an oblique connecting rod and a rocker arm, with return spring. This special connecting rod is also subjected to the action of a ball regulator which, deviating, when the engine is racing, advance a bushing which comes to press on the pendulum which we see arranged laterally to the casing. This pendulum deflects the connecting rod which is no longer encountered at the desired time by the maneuvering finger which, pushing it, causes the rocker arm to move at the other end; this rod therefore escapes the action of the eccentric and the exhaust valve remains closed until the engine has slowed down enough for the governor balls to return to their normal position.

The sheath piston is provided with segments which ensure its tightness: it attacks by connecting rod the motor shaft (fig. 1) on which are fixed, on one side, the pulley-cone with 5 stages giving 5 different speeds and reverse gears; on the other side, the exhaust valve control and the regulating device.

A single belt transmits the speed to the intermediate shaft, placed at the rear of the chassis and carrying a conjugate cone pulley. But the drive shaft cone pulley is crazy on this shaft; by moving it towards the engine, it comes up against a drive knock, which is integral with the shaft and drives the pulley in the forward gear, by moving it in the opposite direction, we engage the reverse gear that we see housed on the left against the steering wheel; the cone pulley, released from the knock, then begins to turn in the opposite direction.

This translational movement is given by a special lever, called a gear change. 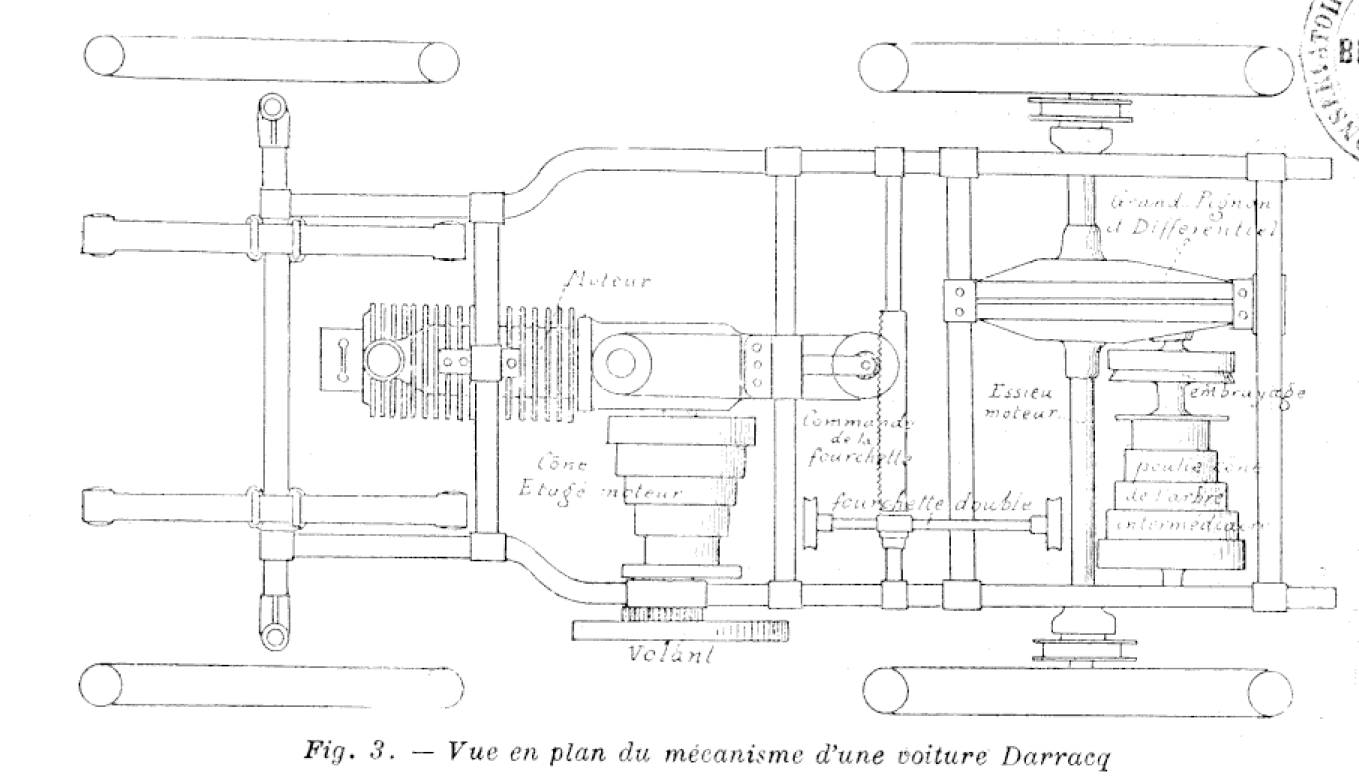 The intermediate shaft, carrying the conjugate cone pulley, is fixed to a sub frame disposed below the main chassis and able to move longitudinally, parallel to the latter. It is by making this sub-frame move back by the operation of a threaded rod and a nut (maneuvers by a small hand wheel within reach) that we can tighten the quant's transmission belt. t desired according to the humidity of the air which, as we know, has a significant action on the leather of the belts.

Also on the intermediate b is the friction clutch (by right cones) which allows the car to stop, the engine continuing to run.

The movement of the belt on the 2 cone pulleys (stepped in opposite direction) is done using a pinion and a rack moving a double fork according to the speed you want to obtain.

The fuel tank is under the seat; it has 3 feeders: one goes to the burner (ignition of the engine by glowing platinum tube) the other feeds the bubbling carburetor: the third is used for degumming the piston rings.

The very simple steering acts by pinion and rack on the steering rod of the front wheels, pivotally mounted as usual."