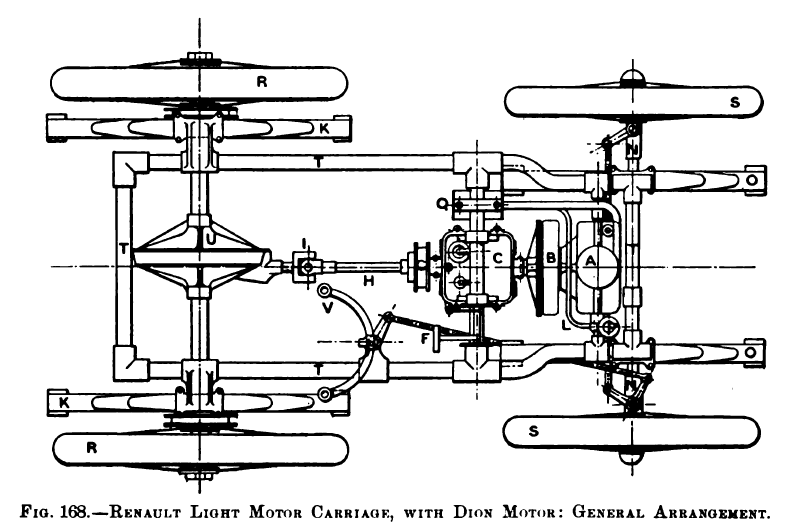 "It is a neat little car driven by a 2 ¼ HP de Dion-Bouton motor placed at A, in front of the car, and driving by means of a clutch B the gear in the gear-box C, by which either of several speeds may be adopted and transmitted to the universal joint within the drum g, which, as will be seen by Fig. 170, provides a handbrake pulley. 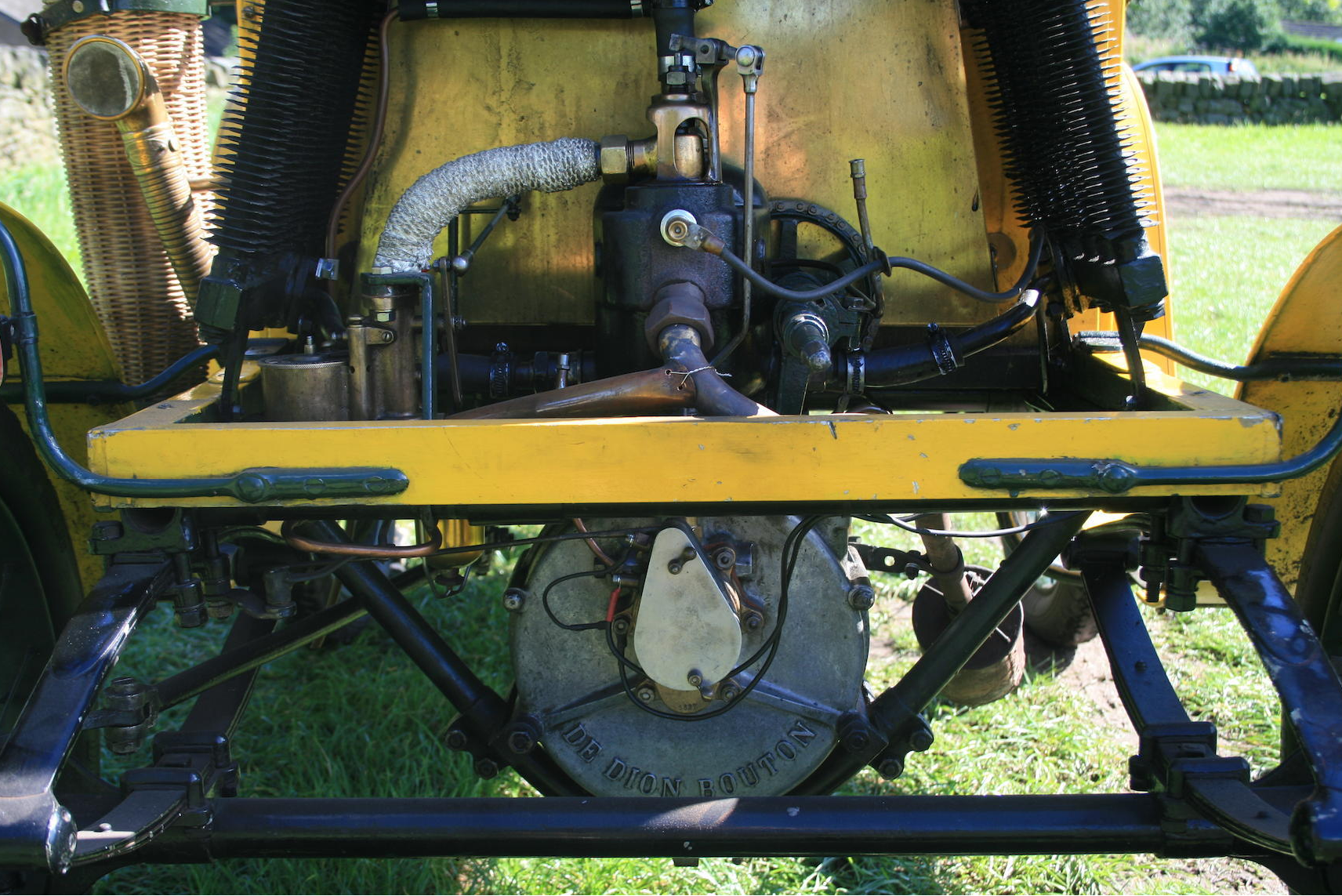 The power is transmitted from the gear by the rod and the universal joint i to the bevel pinion and bevel wheel and differential gear in the box u on the main axle. The frame is of tubular construction, narrowed at the front axle, and it carries, by means of strong brackets, the bridles for the springs k. The steering arrangements are very simple, consisting simply of a cycle handle v, and connecting rod at the lower end of the steering pillar, coupled up in the way seen it Fig. 168 by two rearward arms on the vertical pins in the stud axles at the forked ends n of the straight front axle. The chief point, however, of this notice of the Renault car must be a reference to the speed-change and reversing gear, which, while being very much like that commonly used on lathes of some kinds, has modifications for the purpose of this application which give it interest, The diagram, Fig. 169, is not complete in all details, but it permits of an explanation of the gear в being the clutch as before, it will be seen that a band on the pulley is operated by a hand lever f, Fig. 170, with certain connecting links. At the lower end of a spindle v is a bevel pinion acting on a corresponding pinion on a horizontal spindle. When driving at high speed the drum at G runs at the speed of the motor, the motion from it being conveyed through the sliding clutch m, and its corresponding part , to the spindle 8, Fig. 169. When necessary to change the speeds, the clutch sleeve m is separated from n at e, compressing the spring near m, and at the same time the eccentric spindle, on which the pinion sleeve carrying the pinions 2 and 3 works, is turned sufficiently to put the pinion 1 into gear with the pinion m, and through it the pinion 3 into gear with the pinion 7, thus conveying to the spindle 8 a slower speed. For a still slower speed the eccentric a is turned back again, that on the spindle on the opposite side of the box turned through half a revolution by means of chain gear indicated in Fig. 170, and the pinion mis thus brought into gear with the wheel 4, and the pinion 6 into gear with the wheel 8, and the still slower speed obtained. For reversing the motion of the car a bevel wheel, not shown, is forced into position between the bevel pinions at p, which are separated at the clas clutch d, and reverse motion at the slowest speed thus obtained. The clutch в is controlled by a pedal f, Fig. 170, which at the same time actuates the brake band g already referred to. The whole of the details of the gear-changing mechanism, by turning the two eccentric spindles, cannot be shown without further drawings, but those given are sufficient to show its character, and to show how a completely boxed-in set of gear, suitable to a light car operated by a small motor, may be constructed. 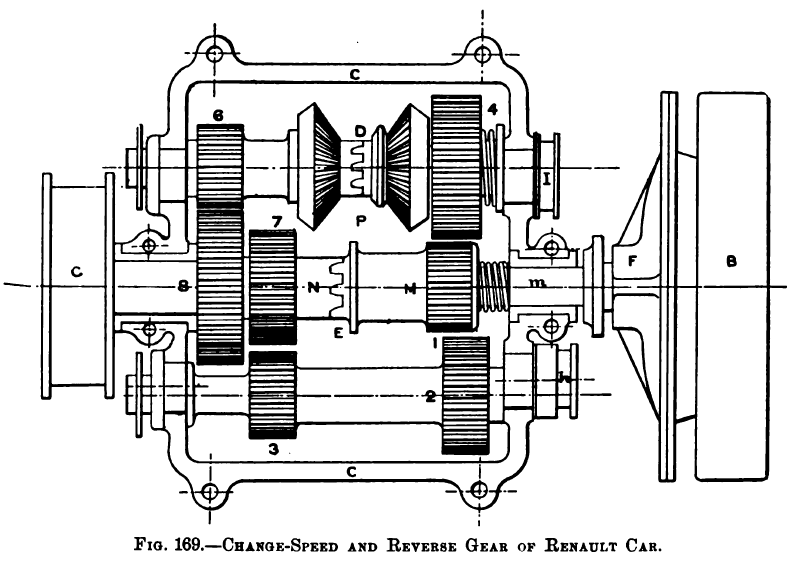 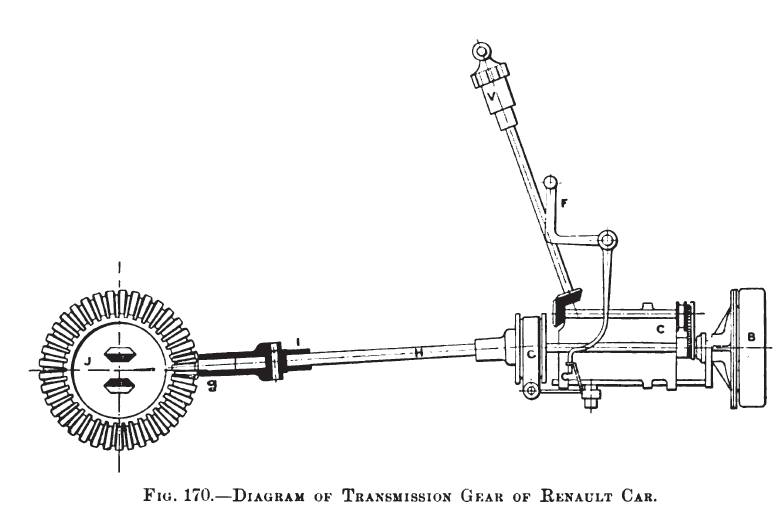 The English patent for this gear is No. 3981 of 1899. The application for this patent affords an instance of the objections to our provisional protection system, a system which opens the door to much very undesirable procedure. Renault's application was made on February 22nd, 1899, and indexed as of February 22nd, under the title of " Improvements in pivotal supporting devices for window sashes, doors, and the like, and was indexed as such in the first quarterly index of 1899. Acceptance was not advertised until it appeared in the quarterly journal for August, when, under the same number, and of the same date as above, the title appeared as “Improvements in driving and speed-changing mechanism for motor cars”. Thus no less than six months of delay of publication of real subject of the application and the misdirection of a misleading title resulted."

"Direct-drive:  Renault's gearbox provided direct drive by coupling the two halves of the center shaft by the dog clutch shown. To engage the indirect gears the dog clutch was parted and the second-speed (lower) shaft, or the low-speed (upper) shaft moved sideways into mesh by means of eccentric bushes. Reverse was provided by a bevel pinion (not shown) being engaged between the bevels on the low-speed shaft. Renault used this type of gear from 1899 to 1906"