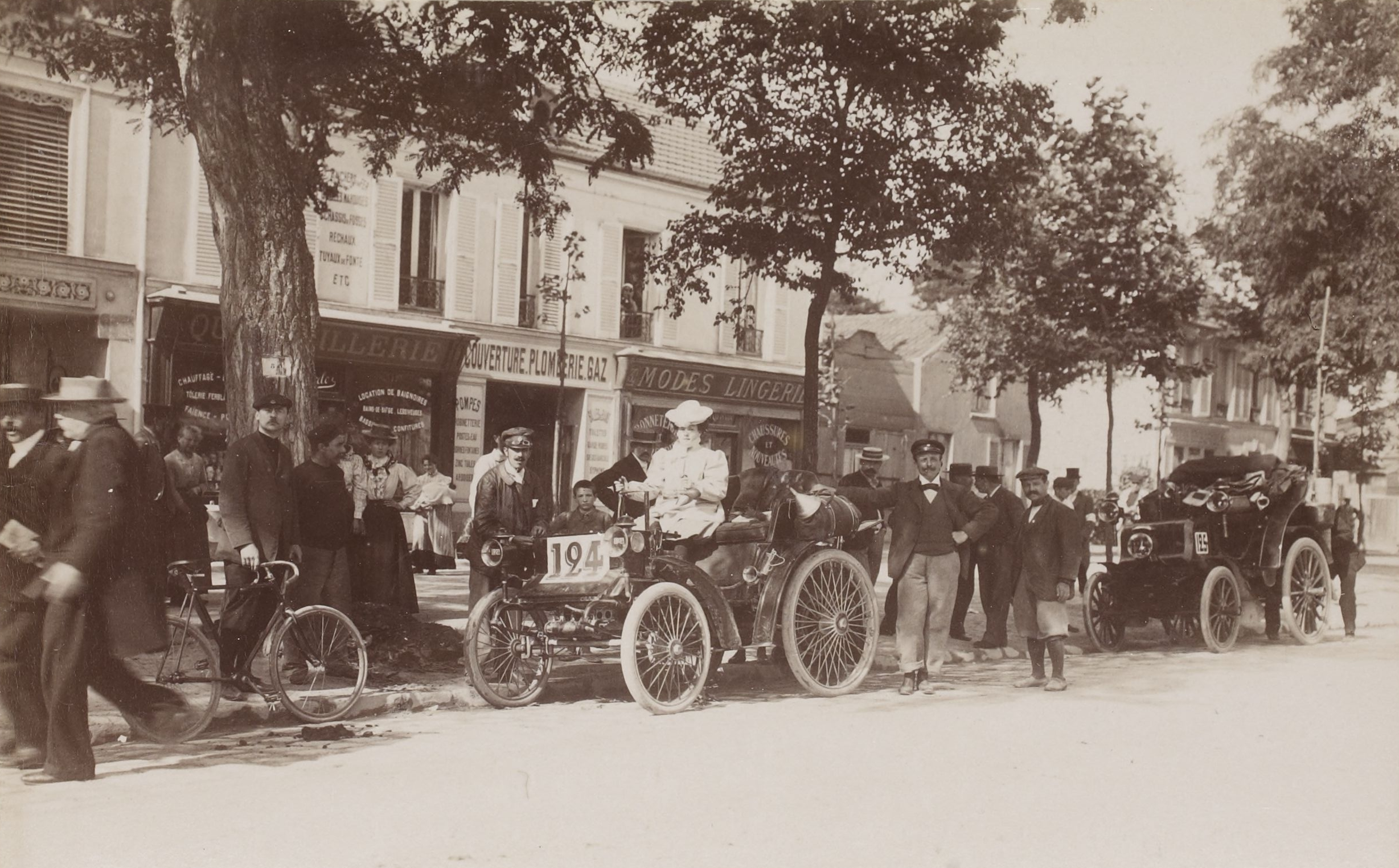 “The new motor of Armand Peugeot, of the Société Anonymé des Automobiles Peugeot, Mandeure (Doubs) France, which was used for the first time in the Paris-Marseilles race, has two horizontal parallel cylinders, shown in C, c being the igniting device. The motor shaft A, parallel with the axles of the vehicle, carries the fly wheel V. in which engages a friction clutch, which by means of a gear drives the intermediate shaft a, also parallel with the axles. This arrangement does away with the longitudinal shaft gear, which was found necessary with the Daimler motor, owing to the fact that it was placed in front and transversely to the vehicle.

The gears furnishing the different speeds are arranged upon the shaft a, and upon the pinion shaft p, carrying the differential D. These pinions p communicate motion by means of chains to two toothed wheels P, that drive the hind wheels R. Steering by the forward wheels is accomplished through a two handled lever, f, acting by a chain upon the axis O, which through the rods b and b’, moves the pivots of wheels F. A lever, L, in the different positions, brings the speed gears in and out of engagement. These changes in speed are effected by impartıng to the spiral groove l certain rotary movements, displacing clutches, which in turn act upon the hubs of the series of gears, sliding upon the shaft a. One position of this groove / brings into gear an auxiliary pinion, which interposed as a third, between the two wheels, fixed one upon the shaft a, the other upon the shaft p, changes the direction of rotation of the latter, and backs the vehicle.

The water tank for cooling the cylinders is placed in the rear at E, and that containing the fuel at G under the forward seat. A brake lever h acts upon two pulleys H fixed upon each of he wheels R. and another pulley N, fixed upon the differential shaft, is braked by the action of a pedal.

The whole mechanism is entirely in, so that there is no danger of its being interfered with by the mud or dust. The water for cooling the cylinders is carried in the tubes forming the framework of the vehicle, and circulates around in a chamber with numerous flanges, which agitate the water and thus facilitate the cooling. The makers claim that the motor will run for a much longer period without water than any other type. In the Paris-Marseilles race their vehicles ran for 220 miles without its being necessary to use the pump, and on the last two days they claim the water was not used at all. The motor is geared for four speeds, and the change is effected by a single lever, which also serves to start and reverse the mechanism.

The weight has also been greatly reduced, and the six horsepower motor does not weigh more than 250 pounds, including the carburetor. Experiments are still being carried on with the gearing, and in the light vehicles this will be effected by friction and leather belting. Several other notable improvements are also to be effected, notably in the carburetor, in which the mixture will be kept at a constant level, thus avoiding the overflow and other difficulties that often result in a stoppage of the vehicle.”