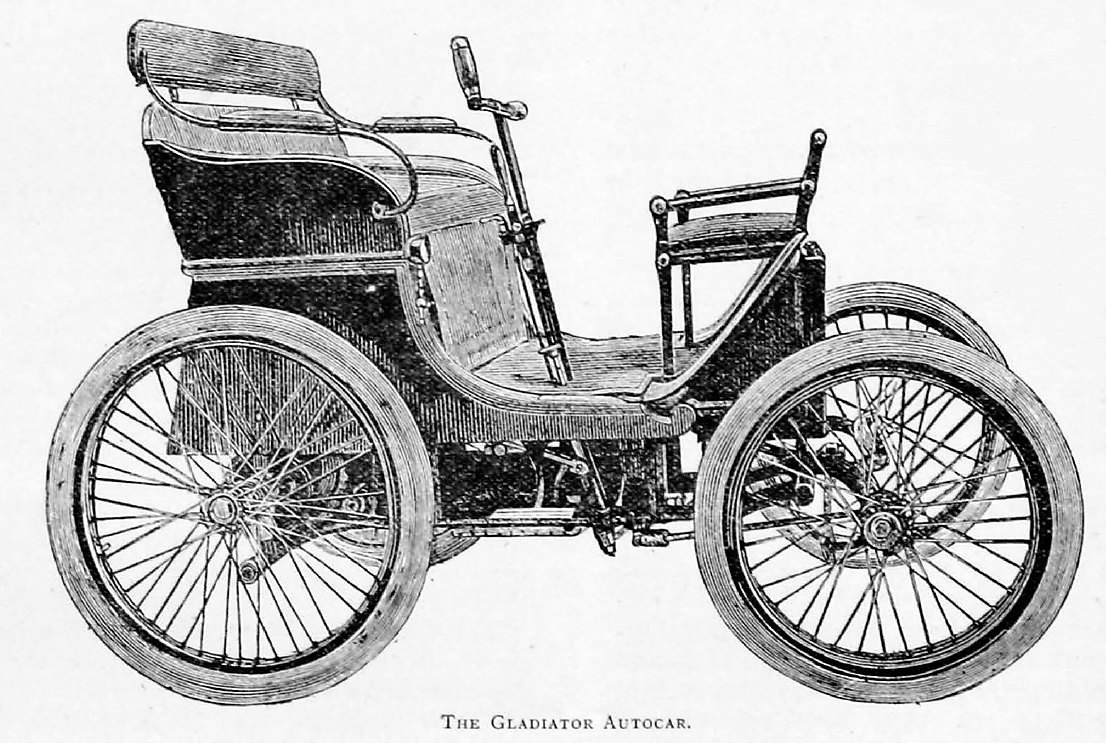 The Gladiator autocar, which we illustrate, is a well-known French make, and presents a handsome and shapely exterior, and is, we are told, remarkable for the ease and certainty with which it can be steered, as well as for the simplicity and strength of its construction.

The illustration shows the autocar which was exhibited at the late exhibition ; it is made to carry two or three passengers as desired, the seat in front being available for a child, or, when let down, the space may be used for the carriage of a small quantity of baggage. The rear wheels are the drivers, and measure 30 in., while the fore wheels, or steerers, are nearly 26 in. in diameter. All four are cycle built, with tangent spokes, and shod with pneumatic tires. The carriage, or frame, as it would be termed in cycle-mechanic parlance, is all of cold-drawn steel tube. The water-tank will contain six and a half gallons, and is placed under the forward seat in such a manner that it is subject to the impingement of a current of air when the car is running, to keep down the temperature. The oil-tank will contain four and a half gallons of essence de pétrole, and is fixed under the principal seat. Altogether, this autocar is said to weigh about three and three-quarter hundred-weights. It is very easily handled, and its center of gravity being designedly kept as low as possible, it possesses a large factor of stability. 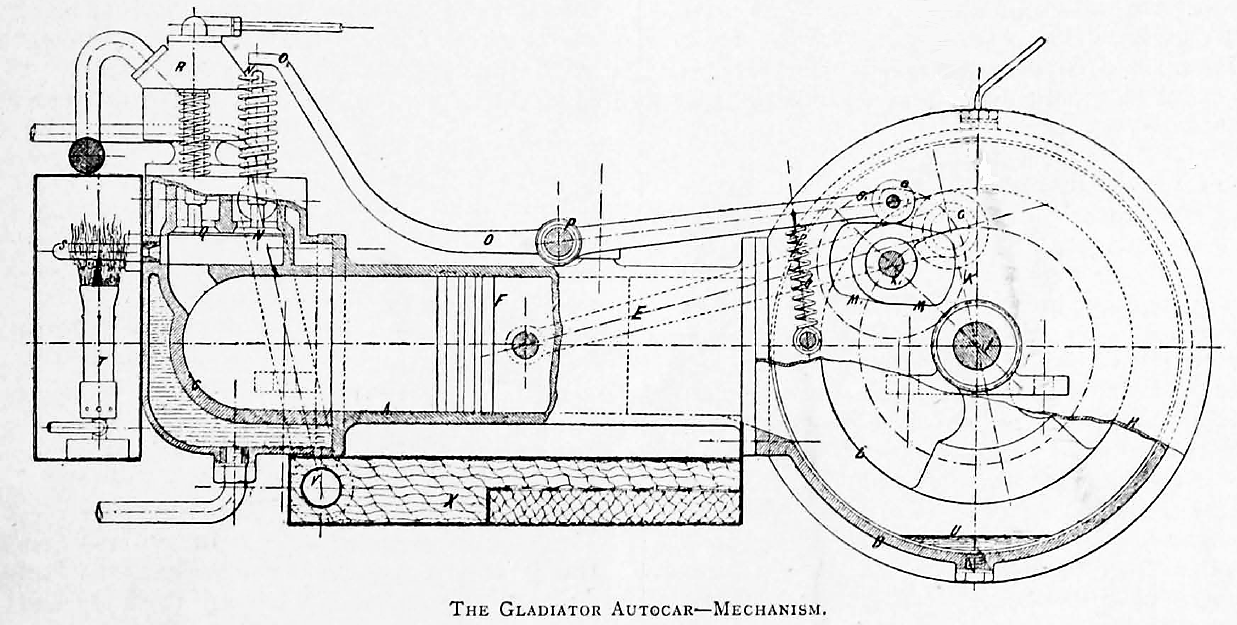 The motor by which it is driven is a Gladiator motor, is of four-horse power, and has two twin cylinders contained in one casting, the end being cast separately, and serving as the explosion chambers. (See fig. 2.) By the use of the two cylinders it is arranged that a power-stroke is obtained at every revolution of the crank. The connecting rods are attached to the same crank spindle, and are thereon mounted side by side. The crank box or oil chamber is closed each side by two lids fixed vertically, the central portions of which carry the bearings in which the shaft runs. Outside the crank of case a spur pinion is keyed to each end of the crank shaft for transmitting power to the counter shaft. These spur pinions being of different diameters are thrown into gear separately, as one or other of the speeds afforded by them is required. The spur pinions are controlled by a specially constructed coupling, which enables the conductor to throw them in and out of gear as high speed for level roads or slow speed for hills is required. The slow speed pinion gears with another having twice the number of teeth keyed to a spindle carrying the two reversed cams which actuate the valves N. In connection with this spindle also two double levers side by side O are pivoted independently in the support P. At their end is a friction roller which is always kept in contact with the nearest surface of the cams by the back motion b. The other ends O are bent round so as to act upon the ends N of the exhaust valve rods. The feed valves N are automatic in their action, being opened by the draw of the piston. At the first charging stroke the valves admit to the cylinder the explosive mixture, the proportions of which are regulated by the carburetor valve R. On the second stroke, the piston F compresses the mixture in the explosion chamber, which is kept cool by the circulation of water in the water jacket surrounding it. At the third stroke the compressed charge is fired by contact with the platinum tubes S, which are heated by lamps in the usual way, and the power stroke results. At the fourth stroke the products of the explosive combustion are exhausted by the pipes V into the box X, which is filled with straw to prevent noise, and escapes thence into the atmosphere. The carburetor acts automatically, and the air in drawn is heated in order to assist in the vaporizing of the essence de pétrole. The carbureted air is mingled before admission into the explosion chamber with a quantity of pure air, controlled by a valve, fixed close to the driver's hand. Varying speeds are thus obtained by strengthening or weakening the explosive mixture. The composition of the explosive vapor as it leaves the carburetor remains practically always the same, the feed being regulated automatically, as is that of the essence de pétrole from the container as the oil in the carburetor is evaporated. The motor gives an average of 680 revolutions a minute, permitting a range of from 51 to 18, miles per hour. The consumption of oil varies from two to two and a quarter pints per hour according to the energy the motor is required to exert. The carriage of six and a half gallons of water is necessary for the cooling of cylinder, etc. The cost of lubrication is next to nothing, about a pint of mineral oil poured into the tank box being more than sufficient for five hours' running. The action of the crank discs within assures perfect lubrication of the working parts. In conclusion, we might add that orders for these autocars have increased to such an extent at the factories of the Gladiator firm that special shops are about to be built for the sole manufacture and construction of these autocars and the motors by which they will be driven."