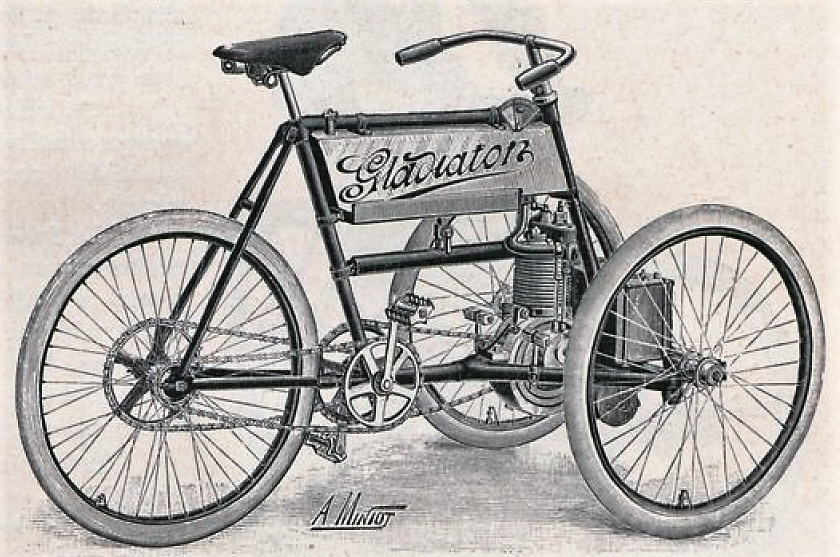 "In France, enterprise, invention, and experiment in the direction of autocar construction is going on apace, and the success of the Daimler-propelled carriages of Peugeot Frères and Panhard&Levassor have incited much emulation. As we suggested recently, the peculiar adaptability of the cycle trade for the construction of this class of vehicle has already been recognized in France, Messrs. Peugeot being already well known as cycle builders, whilst another firm, La Société Francais des Cycles Gladiator, of Pré St. Gervaise, have also been giving considerable attention to the matter, doubtless somewhat assisted by the fact that one of their principal works managers is Mr. C. R. Garrard, one of the joint inventors of the electric autocar which we described and illustrated in our second number. This firm have for some time been experimenting with a motor tricycle upon somewhat novel lines. We are promised a fuller description of the mechanism of the motor at an early date, but we may here say that it is the result of a careful study of the adaptability of the inventions of Mons. Beau de Rochas and Dr.Otto, and is a four cycle engine, the details having been so simplified that two great complications have been entirely, and, we are told, successfully, swept away, namely, the water jacket and the vaporizer. Like the Pennington and some other engines, the ignition of the charge is effected electrically, a small button making or breaking the contact. This being so readily done, we are informed, that the crowded boulevards are daily traversed with more safety when they are in a greasy condition than by a rider upon an ordinary safety bicycle. The store of mineral naphtha carried is sufficient for a run of about nine hours, and as no fire is employed, the fear of the liquid catching fire is altogether removed. The tricycle itself is built upon a principle formerly somewhat largely experimented with in this country, having a single driving wheel, and steering with two wheels swiveled upon a center something like the front wheels of an ordinary four- wheeled carriage. The tricycle was originally studied as a stepping point to the regular autocar, or land yacht, as some of our French friends are inclined to term it, but turning out so well, and working so successfully, the Gladiator Co. have put a number of them in hand, in addition to a tandem quadricycle and a light carriage. The total weight of the tricycle with its engine is fifty kilos, or about 110 lbs. , and the power developed is three-quarter horse. The side wheels are constructed upon folding axles, so that the total width of the machine may be reduced by some five inches, which enables it to be readily wheeled into an ordinary house doorway. Sone little time back, Mr. Garrard brought one of the early samples of this machine on to the celebrated Vélodrome Buffalo cycle track in Paris, and rode it between the races which were going on at the time. The public were not a little surprised at the audacity of the rider, who went off for ten yards with the pedals, then held the pedals still, and let the motor go, attaining a speed of some twenty-nine kilos per hour, following this up by a sort of fancy riding exhibition, as the construction of the machine enables it to be ridden by a skilled cycle rider upon two wheels only, either of the two front steering wheels being able to be raised from the ground by leaning over in the opposite direction, and then steering the machine on its two wheels like a bicycle. We give two illustrations, one showing the machine itself, and the other giving us a different view and also showing Mr. Garrard himself mounted upon it. We may further add that Mr. Garrard himself is present at the Stanley Cycle Exhibition at the Agricultural Hall, which opened yesterday (Friday), and has with him specimens of the tricycle in full working order, where we have no doubt many of our readers will make a point of inspecting it." 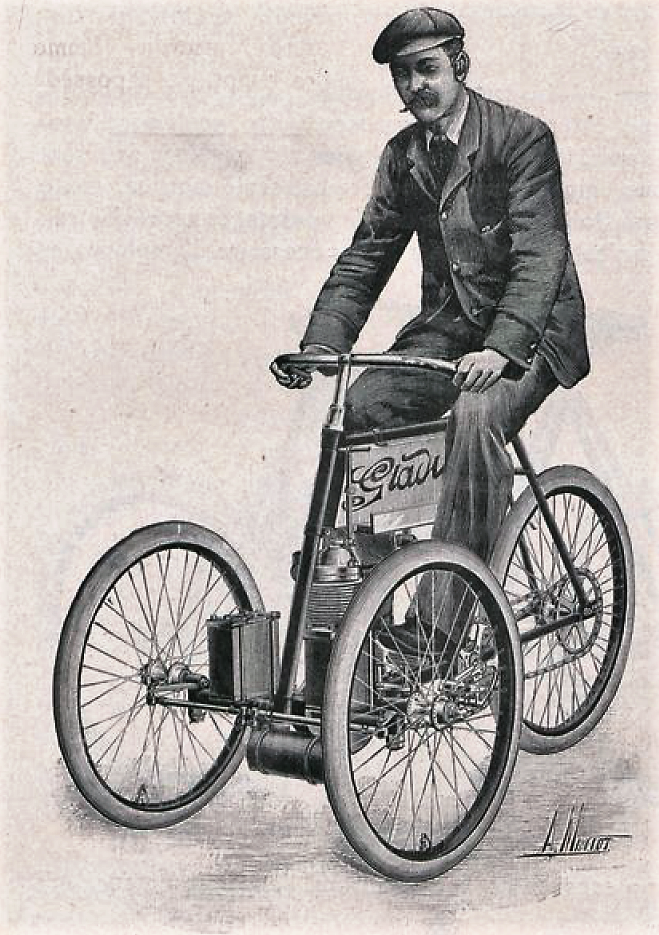