"The Decauville 16-h.p. chassis was another mechanical achievement, which attracted particular attention. The exhibit made by this firm was very complete, and every facility was given for the most minute inspection of all its parts. 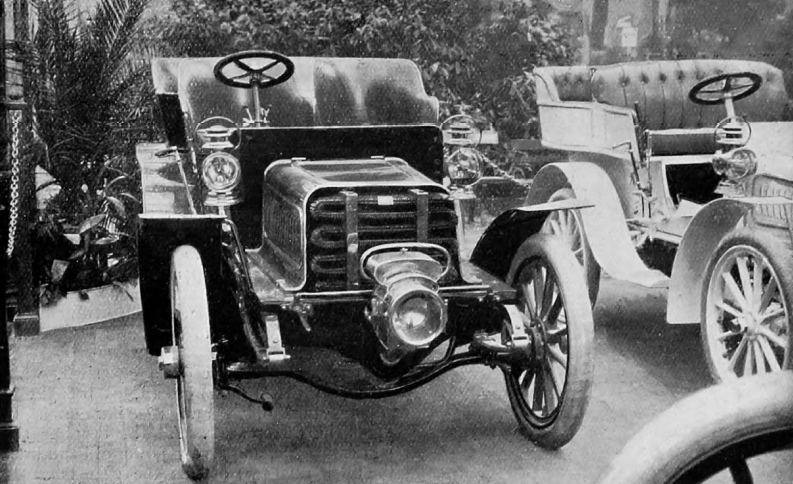 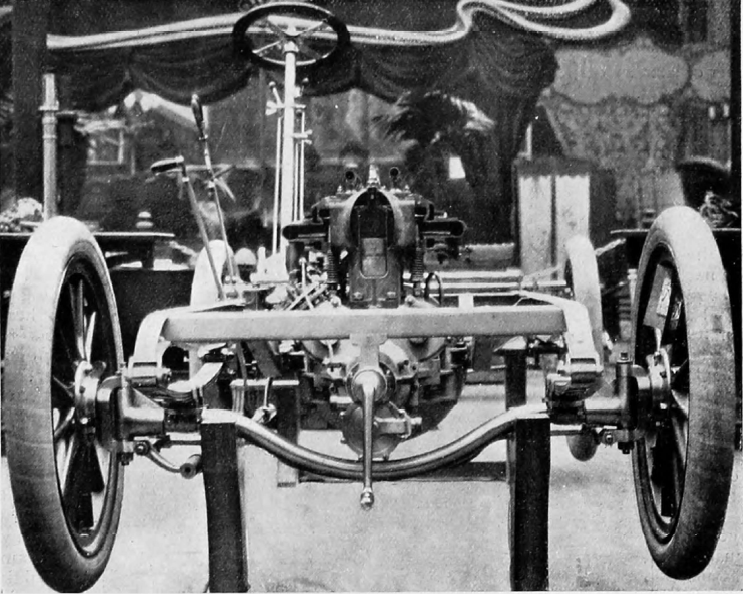 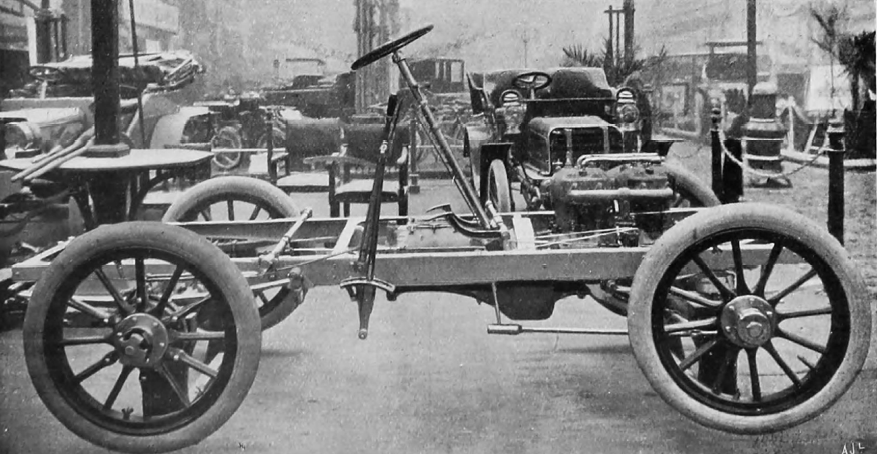 As seen in one of our illustrations, the head and valve chambers of the front cylinder were cut open for inspection, the piston, ignition plug, valves, and water jackets being exposed to view. The excellence of the casting could not but be noticed, for it was one of the best examples of foundry work in this line which we have seen, the uniformity in thickness of the metal being remarkable. Various parts of the transmission gear, including the tube enclosing the longitudinal shaft, and the casing around the live rear axle, were also cut away to show the actual construction adopted.

The underframe is of special stamped steel, and the engine and change-speed gear are carried on an underframe which is but little lower than the main frame. The base of the crank chamber is in one piece with the lower portion of the gearbox, these two parts being thus rendered solid with one another.

The engine is of the 4-cylinder pattern, each pair being cast in one piece. The inlet valves on the one side and the exhaust valves on the other are operated by camshafts on each side of the crank chamber. The spur-wheels driving them are enclosed in a neat casing in front, and the gear driven circulating pump lies beneath the crank-shaft, and is rigid with the crank chamber. The ignition plugs are of the Bassé Michel pattern, and fit into the heads of the cylinders.

The cylinder castings are so made that the jackets are divided into two parts by a narrow wall of metal arranged vertically in the direction of the length of the engine. The dividing wall prevents the water from passing across from one side to the other except at the bottom of the jackets, so that the water is compelled to flow down to the bottom of the jacket on the one side and up the other side. Both the pipes leading to it enter the top side of the casting. The pistons of these engines are unusually long, and project, when in their lowest positions, into the crank chamber. The object of this construction is to assist in their lubrication, and it is said that they receive a good supply of oil from the chamber and carry it up over the cylinder walls. Another unusual piece of piston construction is that the gudgeon pin is prevented from moving by a wide piston ring which does not itself come into contact with the cylinder wall. Apparently the manufacturers do not consider that the increased weight of their pistons is in any way detrimental.

The method of transmission employed is that in which a longitudinal shaft drives the live rear axle by bevel-gearing. The change-speed gear is so arranged that a direct drive through is obtained on the top speed. For the other speeds, the power is transmitted across from the driving-shaft to the driven-shaft through spur-gearing on a lay shaft. In this latest gear-box the lay shaft revolves whenever the car is travelling, instead of being rendered inactive as in their earlier models. The gear-wheels employed are of considerably larger size than this firm have used previously, and they have now adopted larger wheels in all cars made by them. The gear-box is constructed with gutters formed in the casting for catching the oil thrown up by the gear-wheels, and for leading it to the bearings.

The bearings are thus automatically lubricated without its being necessary to lead pipes to them from the dashboard-the longitudinal shaft leading to the rear axle is enclosed in a strong tube, and the bevel wheels which connect it with the differential gear are provided with ball thrust bearings.

The rear axle itself is of very substantial construction. The tubular portions, which enclose the shafts connecting the differential gear with the road wheels, are machined up out of solid forgings ; they not only carry the main frame by receiving the side springs, but their outer extremities form the bearings upon which the rear wheels revolve. The shafts which revolve inside them are also turned up from solid forgings, and the jaw-clutch members which are formed on their outer end are solid with them. In the side view which we give of this chassis, the jaw-clutch coupling is seen projecting from the hub of the rear wheel shaft of which it forms the end can be drawn out bodily, after the cap has been removed from the hub of the wheel. When replaced it enters the boss of the differential gear-wheel which drives it-a square being formed on its inner and for this purpose.

The differential gear is of the bevel-wheel type, and has four planed wheels. The large gear wheel which is fixed to the outer shell of the differential is very securely fixed in place, trouble having, in the past, been experienced at this part ; no less than eight bolts and four rivets are now used to fix this bevel-wheel to the shell.

Brakes of the internal and external type are fitter to the hubs of the rear wheels, those of the one type are operated by the foot pedal, and of the other by the hand lever. No other brakes are fitted, and these are so arranged that the wheels can be removed without disturbing them. The Company fit an ingeniously arranged dynamo and automatic cut-out to all their vehicles. The switch is operated by a centrifugal governor which completes the electrical circuit between the dynamo and the accumulators, as soon as the speed of the engine is sufficiently high for charging; it also severs the connection when the engine speed falls.

On this Company's twin-cylinder vehicles two hand levers are fitted for operating the change-speed gear, but on the large car a single side lever alone is employed, The chassis is extremely well designed and well made the performances of these latest models will be watched with considerable interest." 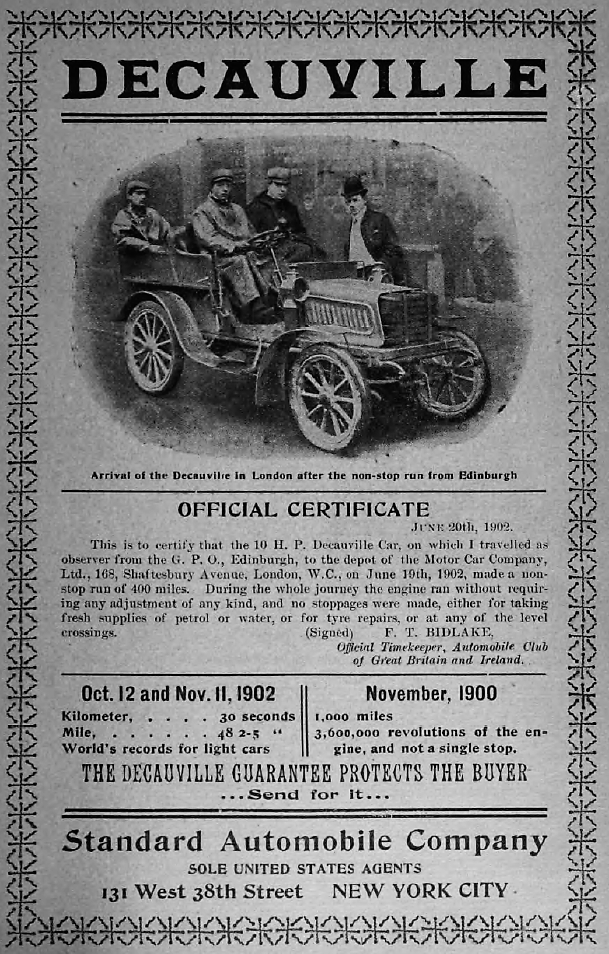