Terry – the winner of Paris-Ostende, the Cup of voiturette, the course de la Turbie and d’Arles-Salon 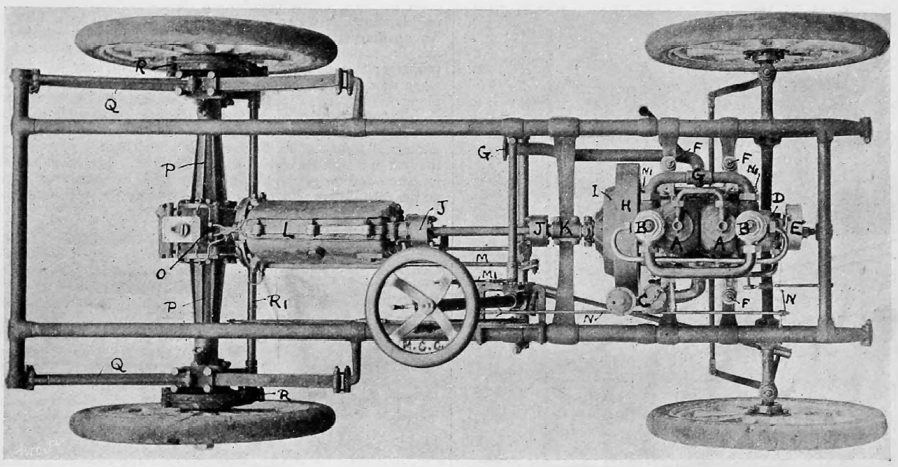 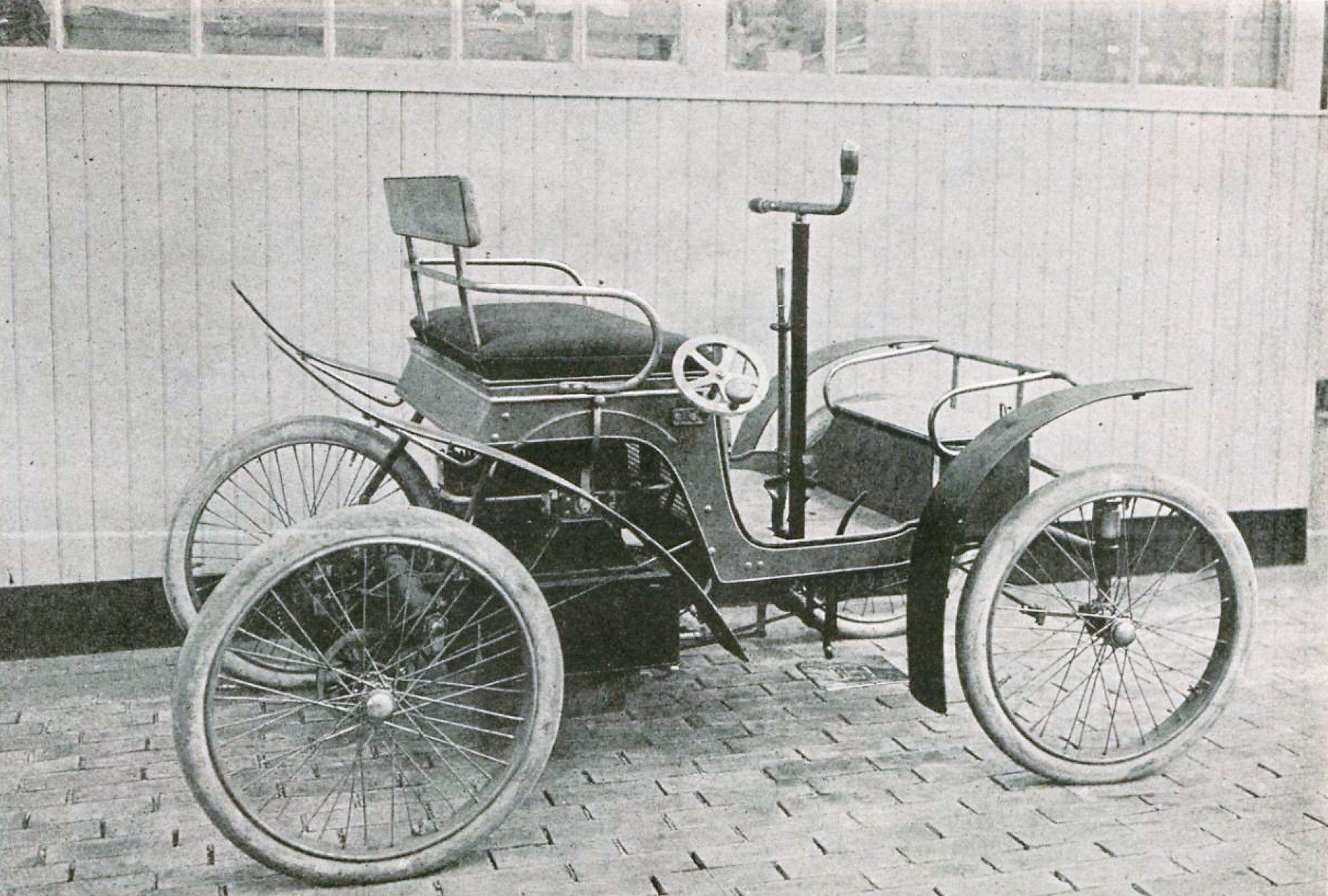 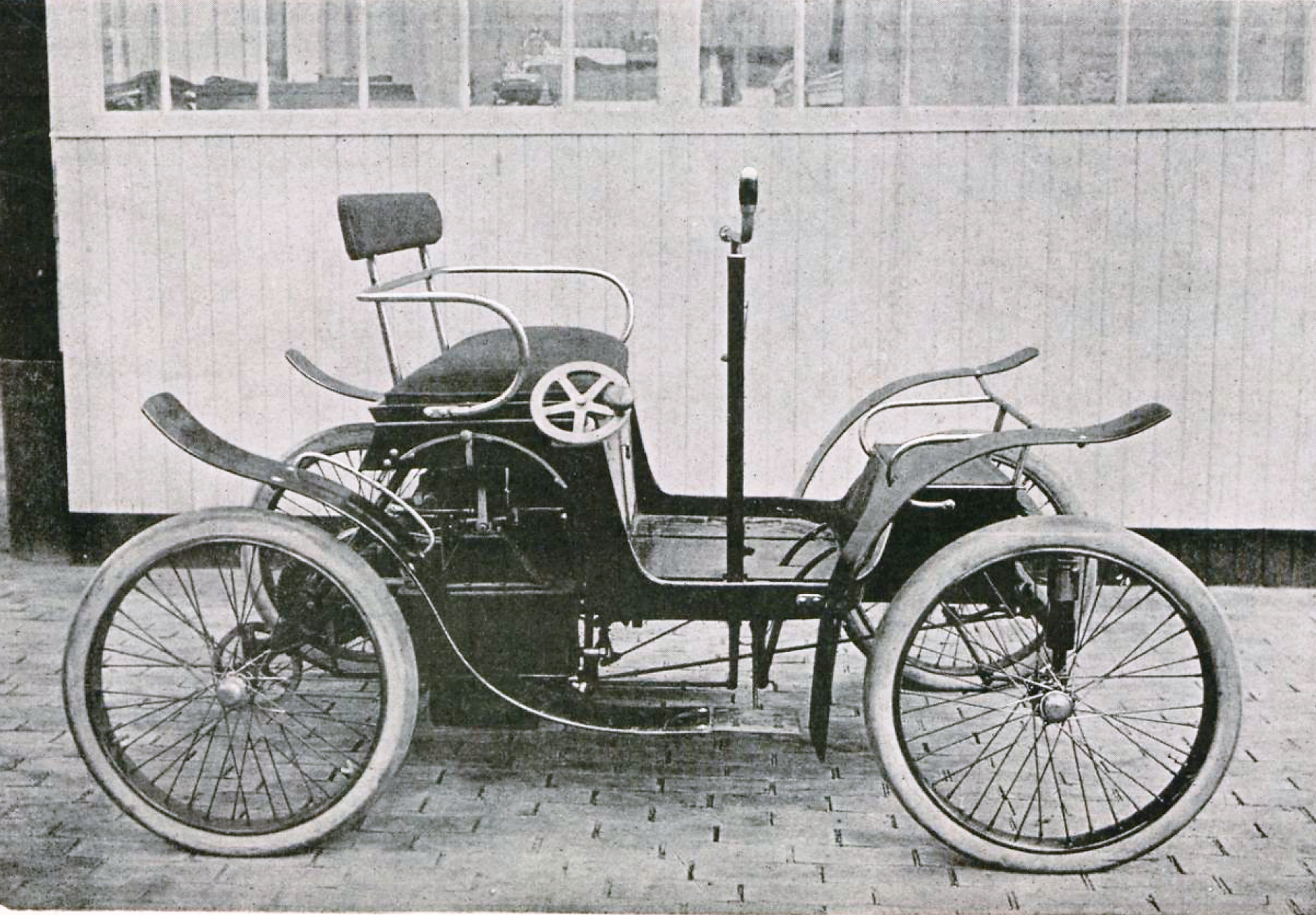 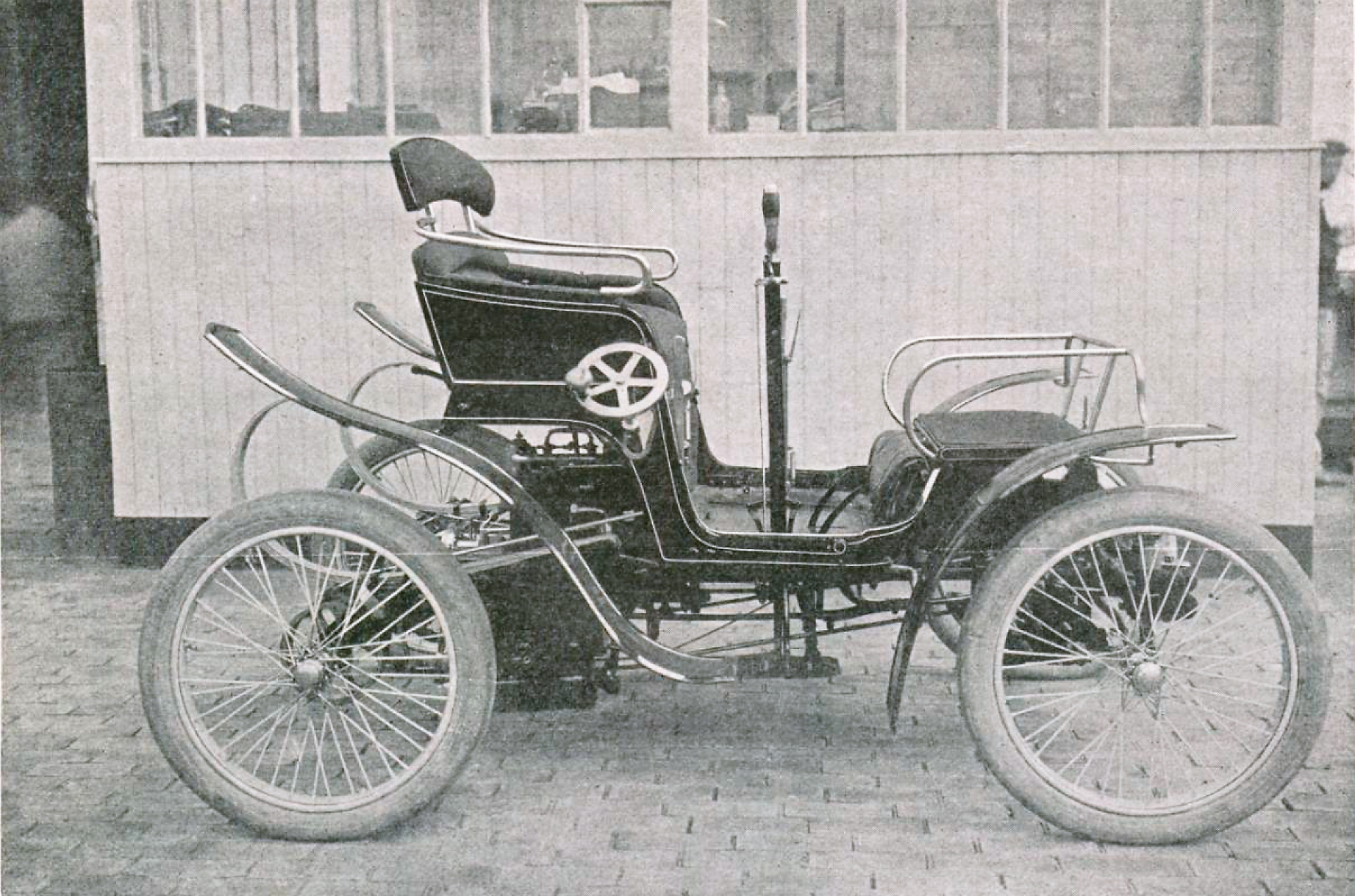 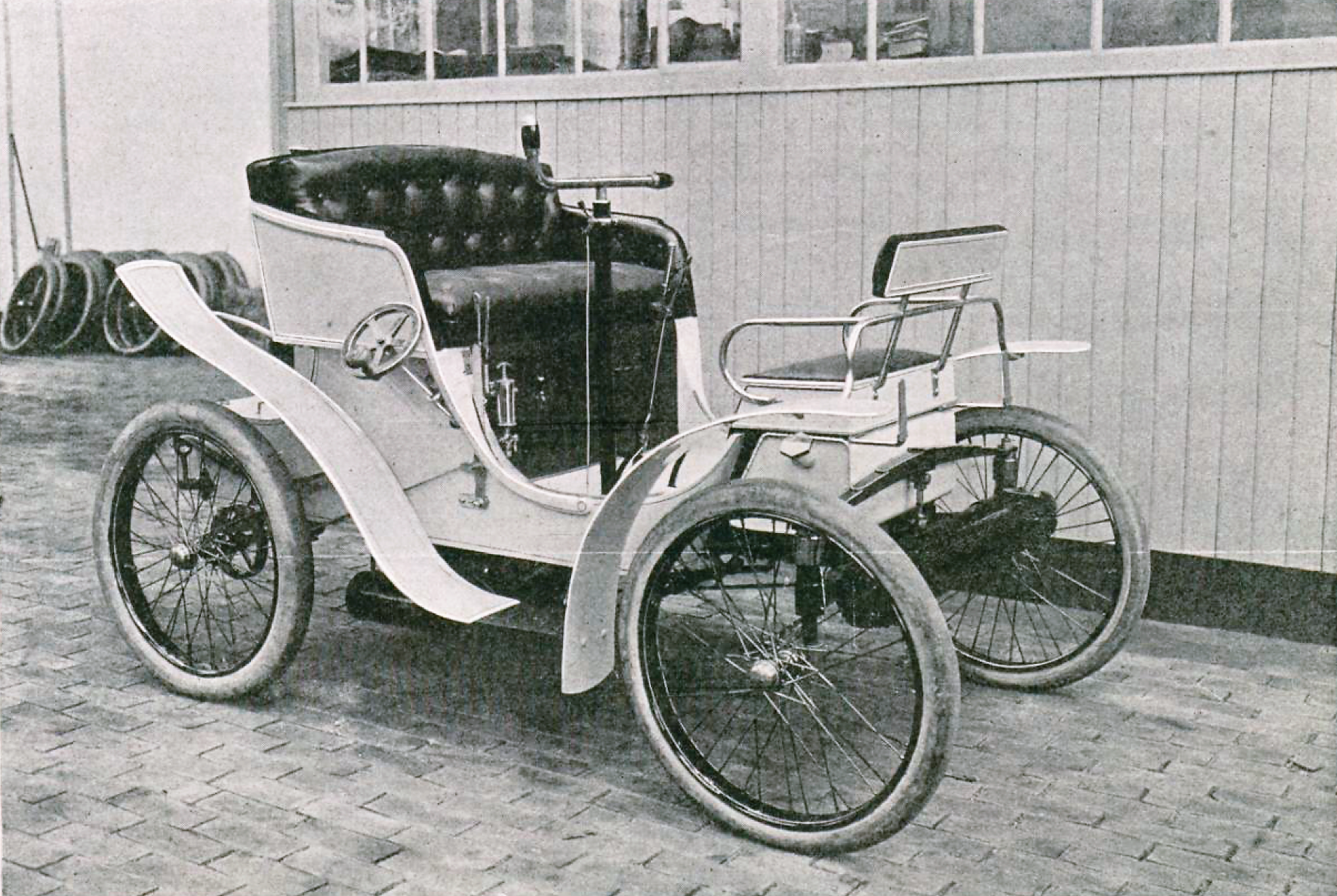 "The Motor Car Company (Limited) exhibited the two Decauville cars which made their long distance runs on the Crystal Palace cycle track lately. The smaller of these vehicles is of the already well-known type, but the larger vehicle is of entirely different design, and is shown in the picture. Referring to this drawing, which is a plan of the undercarriage, a two-cylinder, water-cooled motor, A, is fixed by four bolts, F, to the frame. T. This motor develops 8-h. p. and is fed by a Longuemare carburettor, C. The two cylinders, with their water-jackets, are entirely separate from each other, and are each readily removed by 3 slackening two nuts and swinging over a pair of long bolts which are pivoted at their lower ends to the crank chamber. The inlet valves, B, are so fixed that they can be taken out for examination in a few moments. The springs which hold these against their seats project through the top of the valve castings. When these valves are removed, the exhaust valves, which face them, can be got at for grinding in. The crank-shaft has two opposite cranks, both of which are balanced, and between which is a fly-wheel. A pinion wheel on the forward end of the crankshaft meshes with a wheel on the camshaft above it, and with a wheel on the circulating pump spindle below it. The governor is carried on this camshaft, as also is the electric ignition contact breaker, E. An accelerator, operated by the rods, N, regulates the normal engine speed ; this is connected to a foot pedal in front of the driver. The accelerator regulates the strength of the spring, which acts against the centrifugal force of the governor balls. In order that the governor may control the action of both exhaust valves, a connecting shaft, Ni, passes across the motor and connects the two.

The governor cuts out one cylinder after the other in the usual manner. A large radiator is arranged across the dashboard, over the motor case. Electric ignition is fitted. The exhaust pipe, G, leads to an exhaust box, which is not shown in the drawing. The transmission gearing from the motor to the rear axle is clearly seen in the drawing. The fly-wheel, H, contains a friction clutch, I, and a bearing, K, supports the short clutch shaft. Universal joints, J, are fitted at either end of the connecting shaft, which drives the change-speed gear, in the case, L. The gearing, which is operated by the rod, M, and the hand lever, M1 provides four speeds forward and a reverse ; the latter is obtained through an intermediate idle wheel, which is put into gear by a separate lever.

The castings, 1', containing the live rear axle are made with strengthening ribs. The differential gear and the bevel wheels driving it are contained in the casing, O. All the bearings are fitted with oil pipes, which lead to an automatic lubricator. The rear axle is supported by the semi-elliptic springs, O, and the hubs of the driving wheels are fitted with powerful band brakes, R. The springs which secure the front axle to the tubular frame are placed immediately below the side members of the frame, Altogether this vehicle is one worthy of study."

"The makers of the Decauville voiturettes are placing on the market a new eight horsepower car.

The chief features claimed by the makers for the vehicle are extreme simplicity of construction, speed, hill-climbing capacity, and freedom from noise and vibration. The illustration of the frame, motor, and transmission, with the covers and body removed, clearly shows the simple construction of the car. We need only point out that the motor is placed in the front of the car, and that the gearing is entirely cased in, as are the balance gear and driving pinions upon the rear axle. For this duty aluminum is used. Wheel steering is, of course, fitted. The engine is not speeded to run at unduly high rates, the average revolutions per minute being 850, and it is governed in the ordinary way. The ignition is electrical, and precisely similar to the simple and satisfactory arrangement employed on the voiturettes. In the transmission it will be observed that neither belts nor chains are used. Four speeds and reversing gear are provided, and the highest rate at which the car will run is about thirty-five miles an hour.

One of the cars was used in the Automobile Club tour to Southsea on the roth, and attracted great attention.

The English agents for the Decauville Co., we need hardly remind our readers, are the Motor Car Co., Ltd., 168, Shaftesbury Avenue, W. C. This car possesses a particular interest, as we learn at the moment of going to press that it will, at six o'clock on Wednesday morning next, the 21st inst., be started for a 1,000 miles journey round the Crystal Palace track. This due to the enterprise of Mr. Moffat Ford, who, it will be remembered, as long ago as January 14th, 1899, contributed a letter to The Autocar suggesting non-stop absolute runs. At this time there was no run of any length worthy of note, twenty miles being about the longest.

The test has arisen through a challenge which Mr. Moffat Ford threw out to the Decauville Company. Besides the eight horsepower car which we illustrate now, one of the five horse-power voiturettes will be run through, and it is proposed not to stop either for anything but tire troubles ; and if these happen the engine is to be kept continually at work. The makers, however, stipulate that the drivers shall be allowed to run at any speed they like, and, of course, there is no objection to this, as the event will be decided on the track, and will last day and night till the task is accomplished." 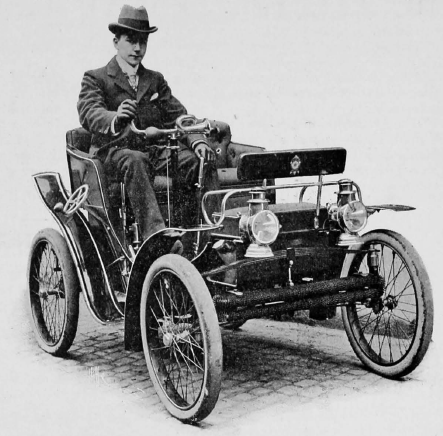 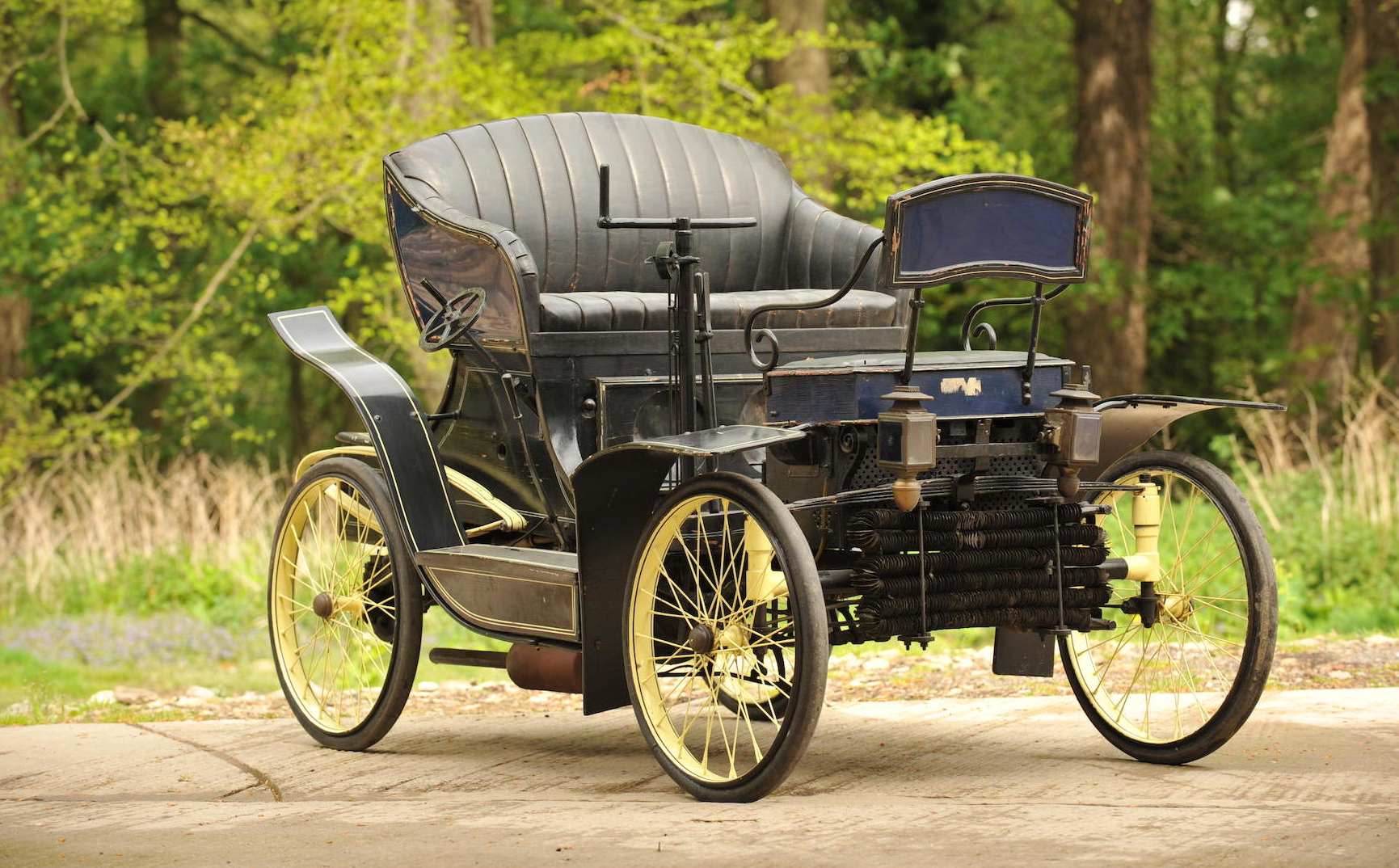 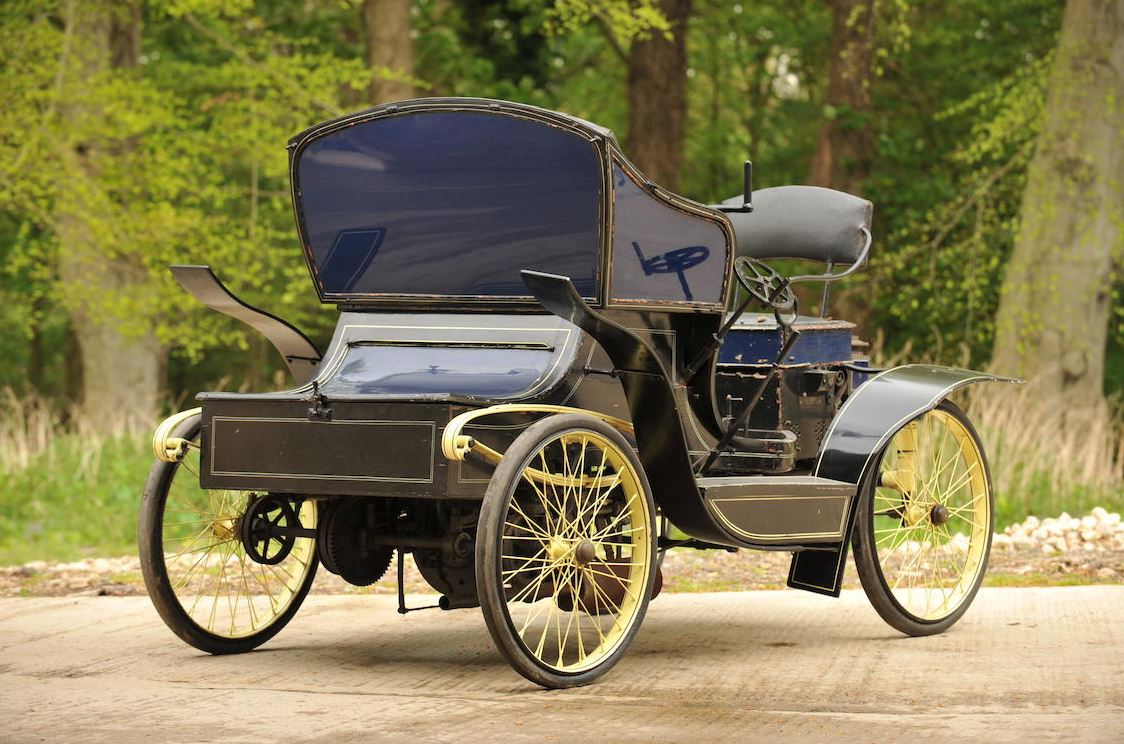 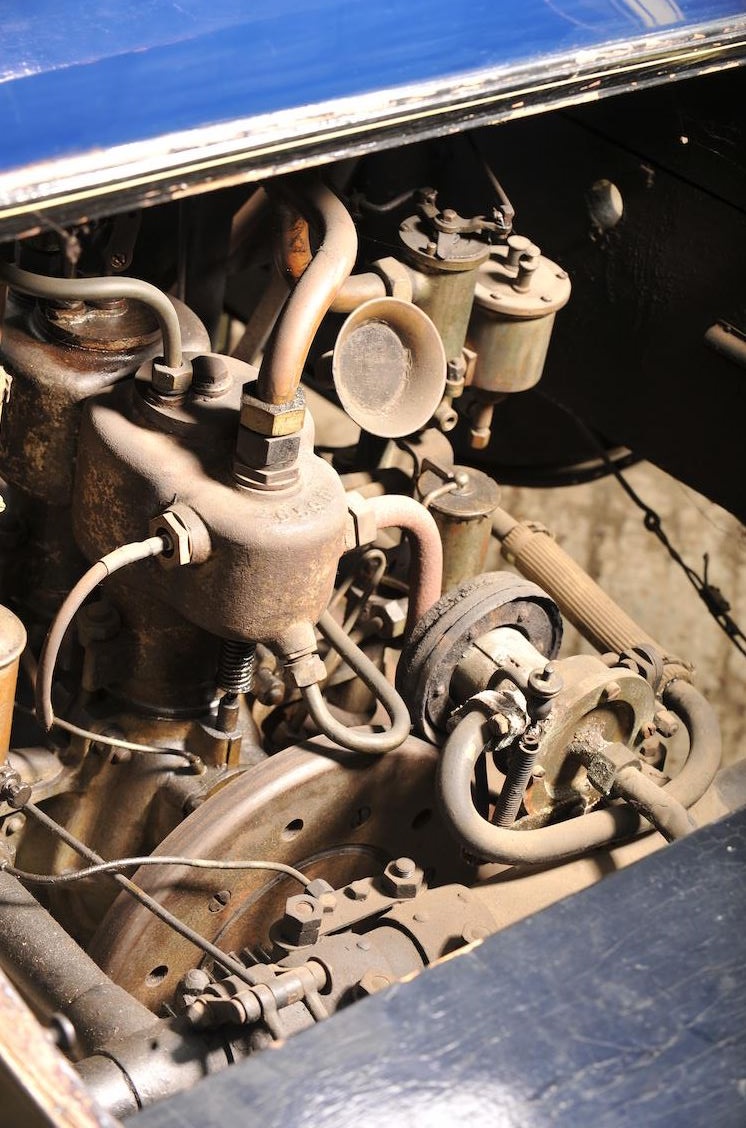