"The chief novelty on the Ader was the 4-cylinder motor, which in general respects resembles their previous double-cylinder engine. Each pair is cast in one piece and is set at an angle of 45 degrees from the vertical ; the crank shaft has only two crank pins, on to each of which the connecting rods from the opposite cylinders operate. The motor has atmospheric inlet valves placed above the exhaust valves, and the ignition plugs are fitted into the heads of the cylinders. Its general appearance is seen in our illustration. 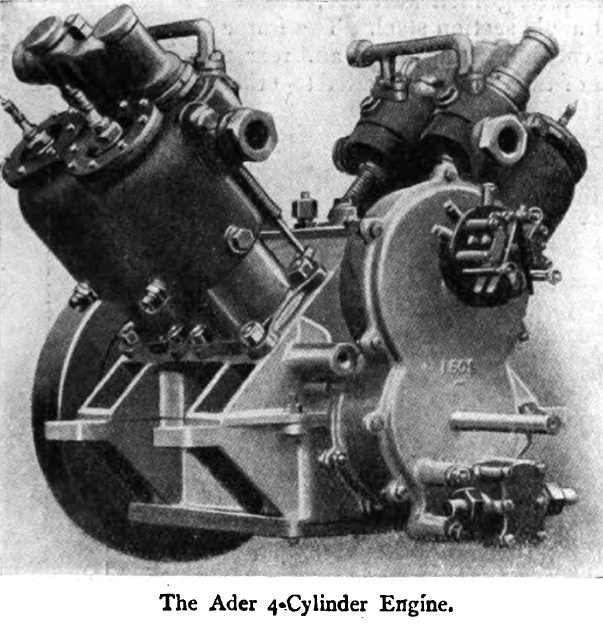 We also reproduce drawings of the latest pattern main clutch adopted by the company, and of their change-speed transmission gear. The clutch is so designed that the thrust is taken by ball bearings, and is not imposed upon the shaft or on the first-motion shaft. The change-speed gear is similar to the Mors design, the drive being direct through the shaft, A, and the clutch jaws, L and L', to the bevel wheel, M, and thus to the differential gear, when on the top speed. 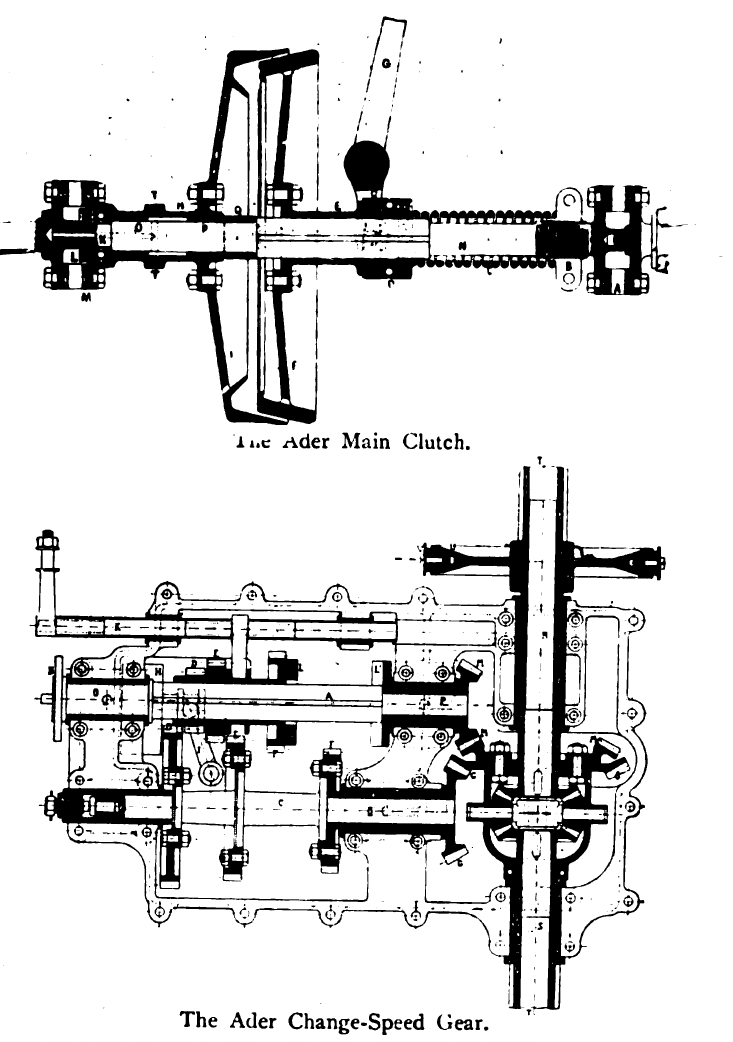 For the lower speeds the power is transmitted through the second-motion shaft, C, and its bevel wheel, G, to the differential. The sliding wheels, D, E, and F, are mounted upon a square formed on the shaft, A, and the back face of the wheel, F, forms the one part of the jaw clutch for the top speed. The company showed one of their 2-cylinder and one of their 4-cylinder motors separately, and they also exhibited a couple of complete chassis on their stall. The main frame employed is tubular, and the underframe is dispensed with. The gear-box is supported at the back by the countershaft, and is secured at its front end by a swinging link to the frame. A separate lever is used for bringing the reverse pinion into play, and the forward speeds are operated by a side lever, the shaft of which passes direct into the gearbox. The countershaft is connected with the rear wheels by side chains in the usual way.

Another interesting feature of these cars is the 1902 type 15-h.p. chassis and also a nearly completed 20-h.p. 1903 chassis. In the earlier model the motor is of the 4-cylinder type with atmospheric inlet valves, and each pair of cylinders is cast together. The main frame is of square tubing lined with ash, and the underframe is built up of angle section steel. The frame is supported on semielliptical side springs front and rear, the forwardly projecting horns of the former being tied together by a cross bar, and the employment of a carburetor of the surface type. It is used in connection with a throttle valve, placed between it and the induction valves ; the throttle valve is regulated by the governor."