in 1886 Panhard & Levassor by this time produced almost no engines. The last two Otto engines had been built and sold in 1883. Archival documents of the company show that in 1884 and 1885, only two steam engines were repaired. At this time, Panhard & Levassor was trying to establish the production of steam engines of the Friedrich system. However, if you look at the statistics of the production of these engines in 1886 and 1887, then you can see the almost complete absence of demand for them. During this time, only two engines were released, one per year.

In 1886 Eduard Sarazin asked Levassor to build a new Daimler engine on his factory at Avenue d’Ivry. In December 1886 the engine was manufactured and delivered to Mr. Edouard Sarazin (charged by 1,450 francs).

In January 1888, Louise Sarazin met with Emilу Levassor at his factory to continue the business of her late husband. Levassor advised Louise to go to Daimler to put everything in order.

Daimler agreed to continue the engine business with Louise Sarazin, given to her the exclusive rights to represent him in France.

After her business trip, Louise Sarazin and Emile Levassor made a deal to make a business trip together in October 1888 to Daimler.

In October 1888, Emile Levassor and Madam Sarazin went to see Daimler at Cannstatt. Reality exceeded their hopes. Both engineers immediately became friends. Daimler showed him all the technical achievements that he made during last years including his first motorcycle “Einspur”, his horseless carriage “Americaine”, a tramway, a motor trolley and a motor boat. All of them worked on Daimler “Grandfather clock” type single-cylinder engine. Levassor knew this type of Daimler engines, because he had already built and studied it at his workshop. However, he paid great attention to the variable-ratio transmission with sliding spur gears that that Maybach had built for the tramway and motor trolley. There was a clutch as well.

However, Levassor was most impressed with the new type of Daimler engine. It was no longer single-cylinder engine, but had two cylinders arranged in a “V”-shape (the V-twin engine) at an angle of about 15°. This engine with reduced size and weight was better-balanced than its predecessor. It was not yet patented in Germany, but Levassor had already understood that it represented a decided step forward. In a couple of years, this engine would become the basis for all Panhard & Levassor cars, as well as those other automobile companies. Due to its compact design and a number of improvements that would be made over the next years this engine would go down in automotive history as the first engine that was both powerful and reliable. Back in Paris, Levassor decided to start a business with Daimler without forgetting about the intermediary role of Madame Sarazin. 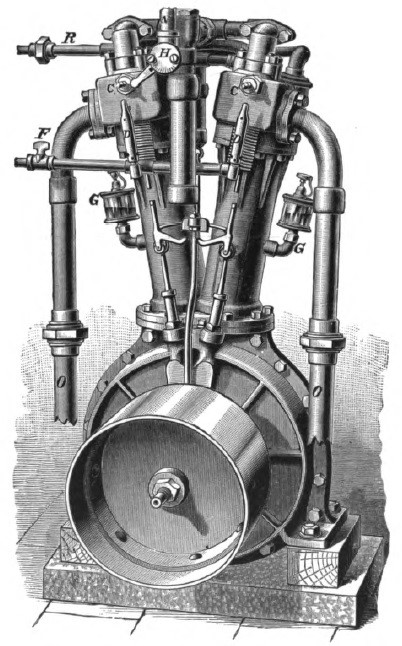 In the end of 1988 there was a very important meeting with Levassor, Daimler and Peugeot at Valentigney . Levassor and Daimler convinced Peugeot of the prospects of cooperation in the production of petrol cars. Levassor pledged to produce Daimler engines at his factory and supply them to Peugeot, which was supposed to start its own production of cars.

During next seven years, Peugeot and Levassor will be close partners and rivals at same time. Until 1895 year, all Peugeot cars worked on Daimler engines built by Panhard & Levassor.