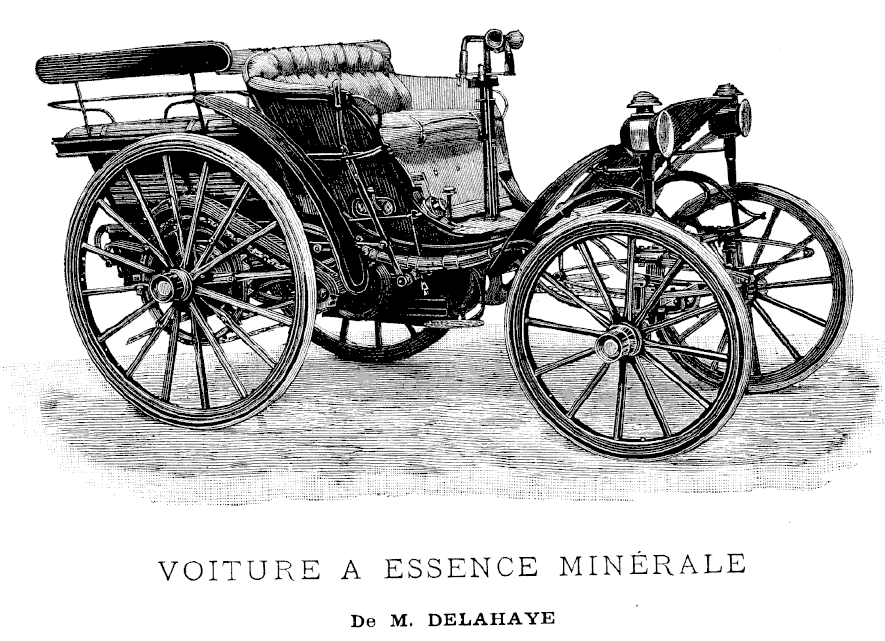 “Among the cars that figured at the Automobile Locomotion Exhibition organized at the Champ de Mars by the Paris-Bordeaux-Paris Race Committee, there is one that seemed extremely interesting to us in several respects and which we will present to our readers.

This is the car exhibited by Mr. Delahaye, builder-mechanic in Tours: it was unfortunately completed too late to take part in the Paris-Bordeaux race.

First of all, what strikes in the Delahaye car is the concern of the manufacturer to make an aesthetic car. While most car manufacturers have simply taken the existing bodywork models and modified them only by adding the engine mechanism and removing the horse, Mr. Delahaye was preoccupied with giving the before its vehicle an elegant and slender aspect which accustoms the glance to no longer seek the horses in front of the car.

This question of the aesthetics of the automobile, although secondary from the point of view of locomotion proper, nevertheless deserves to fix the attention of the manufacturers and Mr. Delahaye seems to us to have resolved it very happily, in a sober and fall into the fanciful exaggerations produced by the “Figaro” competition on the best form to give to motor cars. 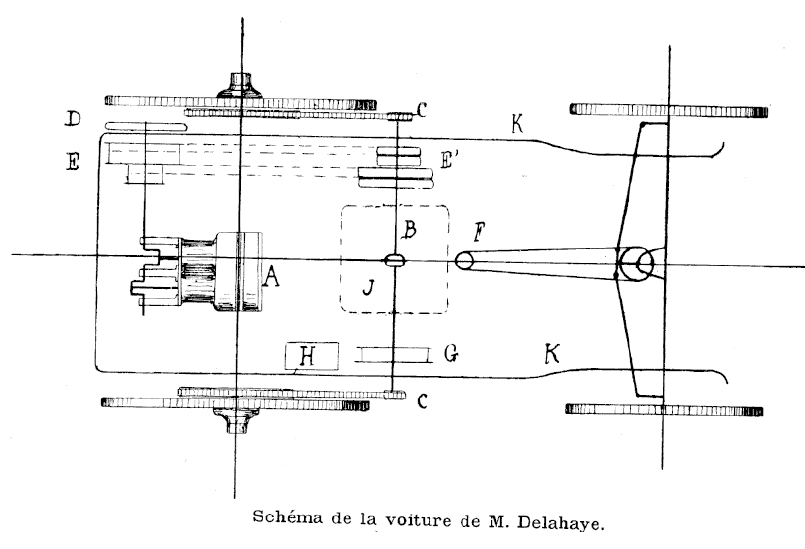 Besides a glance thrown on the drawing above will be enough to convince our readers. The chassis of the car is made of steel tubes similar to those used to form the frame of bicycles. This construction has the advantage of combining great lightness with extreme rigidity and solidity. This chassis supports the body of the car which can, if necessary, form a 4-seater or a 6-seater station wagon. This arrangement allows, with the same chassis and the same mechanism, to have a body of any shape and to make different types of vehicles.

The steering is done by coupled wheels, each wheel pivoting around a vertical axis and as the front axle is relatively lightly loaded, the result is that the steering is easy and smooth and that a possible obstacle crossed by a wheel before transmits to the driver’s hand only an insignificant blow.

A characteristic of the Delahaye car is its considerable “wheelbase”. “Wheelbase” is the technical term used to designate the distance between the end axles. The larger the wheelbase of a vehicle, the more its stability increases. This question is of great importance when the vehicle is driving on a rough tarmac or on a paving stone that is not even. If the axles of the are too close together, the car takes a pitching or galloping movement and the speed must be reduced, under penalty of serious damage. If, on the contrary, the axles are far enough apart from each other, the running of the car remains satisfactory, even on very poor roads, with considerable speed.

We have kept for the end the most interesting part of the Delahaye car, the engine. This new engine is composed of two horizontal cylinders each piston actuates a crank set at 180 degrees with respect to the neighboring crank. The fact is that the moving mechanical parts are completely by themselves and without counterweights, hence the lack of trepidation that the public blames petroleum cars for so much.

In experiments made a few days ago in the presence of several engineers and some members of the Paris-Bordeaux-Paris Race Committee, this absence of hectic running was very noted and earned Mr. Delahaye just congratulations for the progress he has made on this count. The car runs smoothly, without tremors and one is as well carried there as in an ordinary car; because the rotation of the engine that powers the car is barely noticeable.

The diagram that we publish on the other hand makes it possible to realize, at first sight, the provisions adopted for the transmission of the movement which is done by the intermediary of belts to the differential shaft actuating two control pinions carrying the chains of drive wheels.

The normal speed of the engine is 450 revolutions per minute and its power reaches 5 horses of 75 kilogram-meters. The hydrocarbon gas it uses is supplied to it by light petroleum weighing 700 grams per liter. It is the product known as mineral spirits which is found in most grocers in all localities of France. You can also drive almost 300 kilometers without refueling, and the average speed of the car reaches 25 km an hour on flat roads and with a load of 5 or 6 travelers.

The carburetor is automatic: you adjust it at the start and this adjustment is done once and for all, you no longer have to worry about it. The ignition is carried out by electric spark, which makes it possible to vary the ignition point as well as the driving power by depleting the gas mixture and gives an extraordinary elasticity of power for a gas engine. The cooling of the cylinders is obtained by a circulation of water produced by a small centrifugal pump. This water, leaving the cylinder casing, passes through a series of tubes placed at the front of the vehicle, and this sort of surface condenser cools, by contact with the air, the heated water, which allows to cool the cylinders with a very small amount of water.

The gearshift levers are joined to the steering handlebars, so that the driver has all the engine control devices on hand. These details have been very carefully studied and very happily resolved in order to minimize the concerns of the driver who has little to worry about but the road ahead.

The stopping means are ensured by two independent brakes from each other which give travelers complete safety. The wheels are lined with rubber to avoid noise and give more smoothness to the ride.

These are the main provisions of the Delahaye car: we will add only one word: without being chauvinistic in a technical question, it is nice to note that Mr. Delahaye was inspired only by himself in the study of all its mechanism. The engine he presents to us is from him and truly new; it was built by him in his workshops in Tours. It is a French engine and it has nothing to owe abroad neither for its origin nor for its manufacture. It is another title to our sympathy.”